South Korea: Still in the market 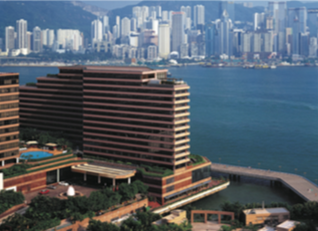 Global real estate is getting more expensive, but that does not seem to be discouraging South Korean institutions. Florence Chong reports

When a global property consultancy hosted a recent seminar on offshore investment in Seoul, every available seat was taken. There was a cross-section of Korean institutions, ranging from pension funds, insurance companies and asset managers in the audience.

The high level of interest did not surprise Alistair Meadows and his team who hosted the presentation. As the head of Jones Lang Lasalle’s international capital group business in Asia Pacific, Meadows has been working with Korean investors to secure overseas assets.

The appetite for offshore real estate, it seems, is far from satisfied. “In a session during our presentation, we asked the three Korean investors on the panel for their outlook,” Meadows said. “They said that the outflow is unlikely to slow down because of limited opportunity to buy investment-grade assets in Korea. So, in many respects, they have no choice but to continue to invest outside the country.”

In the latest investor intentions survey, released in March, CBRE found that South Korean investors retained the most positive attitude towards outbound investment in 2016, followed by investors in Singapore.

Petra Blazkova, head of Asia Pacific Research at RCA Analytics, told IPE Real Estate: “We have seen increasing outflow of capital since 2009, but 2015 has seen the highest volumes of transactions by Korean investors abroad. This is a result of the relatively saturated domestic market, rising cost of financing and compressing yields.”

The Public Officials Benefit Association (POBA), which provides provincial civil servants with a benefit system, is another prolific buyer abroad. Almost 40% of its property portfolio of $1.14bn is located in Europe. RCA statistics show that POBA’s real estate acquisitions have all been overseas since 2015.

Mirae Asset Management was the biggest spender last year, purchasing five assets for a total of US$1.6bn, including an office block in Washington, DC for $445m.

Blazkova says the recent depreciation of Asian currencies, including the Korean won, has added to the compulsion to invest abroad. “We expect Asian currencies to continue  depreciating, albeit a slower pace in 2016,” she says.

RCA ranked South Korean investors as the sixth-largest source of real estate investment capital in Asia in 2015. Blazkova says the Korean strategy is to play in large liquid markets and investors are generally not too concerned about price.

In fact, she notes that they have been known to set new benchmarks for pricing. This observation is borne out in Australia when the Koreans acquired assets.

Like other North Asian investors, they are drawn to trophy assets. Three years ago, the Mirae Asset Group outbid strong competition to buy the Four Seasons Hotel in Sydney for AUD340m.

The Korean National Pension Scheme paid $685m for Aurora Place, a prestigious office tower in Sydney in Australia, in 2010. It was a record for the highest price paid for a single building by a single investor in Australia.

And KIC acquired the InterContinental Hotel in Hong Kong for $935m.

Meadows says some of the local asset management companies, including Samsung Asset Management and Mirae, are active in bringing institutional investors to transactions. 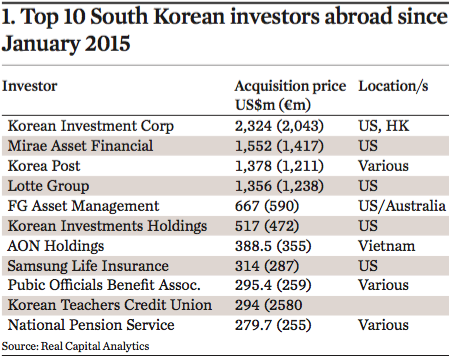 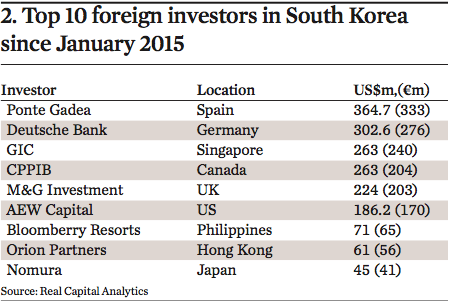 The Hong Kong-based Gaw Capital has been particularly successful in working with the Koreans. Aside from the InterContinental Hotel in Hong Kong, Gaw Capital also acted for Korean investors in the purchase of the London headquarters of retailer Marks & Spencer for £124m in 2013.

Recently, the US-based manager Hines worked with Samsung to jointly acquire the Silberturm office tower in Frankfurt for €451m from IVG Institutional Funds. In January, another asset manager, GLL Real Estate, worked with a Korean institution to acquire CoBank Centre in Denver from Shea Properties.

FG Asset Management, another Korean company, has been buying in Australia, with the purchase of an office building in the capital Canberra for AUD225m (€152m) in December 2015.

The transaction followed two other purchases in Melbourne and Albury for a total of AUD230m two months earlier.

But with prices for core assets escalating in gateway cities, Koreans have had to review at their options.

When Samsung SRA launched a ‘blind-pool’ fund to invest in overseas real estate, it was venturing into uncharted waters. In a land of club arrangements, this type of fund was a novelty.

Young Chai, CIO and founding member of Samsung SRA Asset Management Company – a division of Samsung – admits that blind funds (where investors do not know what assets the manager will eventually buy) are rare in South Korea.

“Select investors are open to blind funds, but many are still uncomfortable with them,” Chai says. “They want to know what the asset is and what the returns are before committing their money.”

He adds: “We are the only asset manager (in South Korea and after GFC) to raise money first and then invest in overseas real estate. More typically, Korean investors go with asset management companies, which put clubs together to invest in specific properties.”

In that sense, he adds, these are project-specific funds. The funds do not invest in other projects, and they are closed-ended, typically with a five-year term.

“We have already invested in the US and committed to another building in France, so we think we should be able to complete all our investment sometime this year.

“Assuming everything goes according to plan on the French asset, we should have invested about KRW350bn of the blind fund by the end of June or July. Additionally, we are pursuing other acquisition opportunities now.”

When the capital is fully deployed, Samsung SRA will turn its thoughts to a second fund. “If we finish committing all the capital in the first half [of 2016], we will look to launch a second fund in the second half,” Chai says.

Until recently, Samsung itself also ran asset-specific funds and has a suite of 15 funds. Collectively, they manage just over $2bn (€1.8bn) in equity and, with leverage, own assets valued at about $3.5bn. 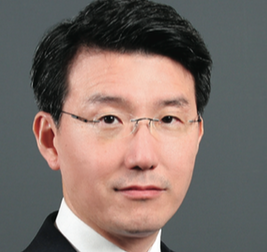 There is heightened interest among Korean investors for overseas assets, he says. Firstly because investors want diversification and, secondly, because returns tend to be higher on a risk-adjusted basis than those from the domestic market. Lastly, he says, they might have reached the ceiling of their allocation to the domestic market.

“Allocations to real estate vary and depend on the specific strategy of an institution,” Chai says. “Typically, insurance companies do not have a high allocation to real estate, but pension funds do.”

Currently, outstanding funds under management in the real estate fund sector total about $30bn. The figure is higher when leverage is taken into account, Chai says.

Funds under management have grown in South Korea by about $5bn each year for the past two years. However, not all of these funds invest in real estate equity. Some are dedicated to commercial real estate debt, or project financing.

“In the current uncertain global economic environment, some Korean institutions have become more risk-averse,” he says. “They look for cash-on-cash yield. But – although generally more risk averse – some are still prepared to go up the risk curve to secure assets. But returns have to be commensurate with the risk.”

Crockett says South Korean investors see more downside risk in equity than in debt. They are prepared to take on senior and mezzanine debt and preferred equity.

Young Chai, CIO of Samsung SRA Asset Management, says: “Our view is that investors are looking for safer investments and they are doing so by investing in a different segment of the capital stack. Instead of investing in leveraged equity, some investors are investing in mezzanine debt.”

But the investment choice ultimately depends on the investors’ appetite for risk.

Young adds: “We have certain investors who want low-risk assets, but others are more willing to move up the risk curve to achieve higher yields. By and large, however, we find that

investors in general are not willing to move up the risk curve even though yields are getting lower.”

While the Koreans go offshore, Seoul remains an attractive market for foreign investors, even though good assets are hard to find. The best opportunities are perceived to be in the logistics sector.

Canada Pension Plan Investment Board (CPPIB) formed a joint venture with Dutch pension group APG to establish a $500m (€443m) platform to develop logistics assets in Korea in November, in a joint venture with the Asian group e-Shang. CPPIB said the initial equity commitment could be increased to $1bn.

In May 2015, CPPIB teamed up with Singapore’s sovereign wealth fund GIC to buy D Cube Retail Mail in Seoul for $263m. GIC has been investing in South Korea since 2006, when it purchased the Seoul Financial Centre for $400m.

The GIC is partnering South Korea’s ADF AM to develop the Dongtan logistics complex in Gyeonggi Province over the next three years. The project will cost KRW800bn (€603m).

M&G made its first purchases in South Korea in 2003-04. Nguyen says M&G could see that South Korea’s property market was going to become more open.

“We saw the opportunity to acquire assets which we knew then would start to appreciate in value as the Korean economy progressively matured,” Nguyen says. “As the physical real estate market and the Korean domestic capital market develop further over the decade, we have seen significant growth in our investment values. We bought in at the cap rate of around 8-9% and now we are looking at a cap rate of 4-5%.”

But the window for such gains has generally closed and, subsequently, foreign investors are having to find niche opportunities in the South Korean real estate markets.