The Godzillas of global property investment – Japanese pension funds, banks and insurance companies – are waiting at the gate. They could, if they wish, alter the global real estate investment landscape almost overnight.

Collectively, they may have as much as US$330bn (€303bn) to invest, although much of that could well stay in their home market. That still leaves many billions for global investments.

As an example, Japan’s Government Pension Investment Fund (GPIF) dwarfs every other pension fund in the world. At 31 March 2015, it had assets totalling ¥134.7trn (€1.2trn).

“If you look at the Japanese life insurers and regional banks, the size of their overall assets are five times bigger than GPIF and public pensions,” says Yukihiko Ito, managing director of Asterisk Realty, a Tokyo-based placement agency.

“Roughly speaking, we reckon Japanese banks have about US$4-5trn in assets, of which Japan Post Bank alone accounts for US$1.7trn. Japanese insurers have assets of about the same size as the Japanese pension system – about US$3trn,” says Muto.

He explains that Japanese financial institutions are traditionally fixed income investors, but given the collapse in bond yields globally, they are now looking to other assets that could provide bond-like returns with similar liquidity characteristics.

As one, Japanese institutions have now adopted new strategies for alternative assets, of which real estate will make up around 3%. On this basis, Muto estimates that Japanese financial institutions and pension funds have some US$330bn to invest in real estate.

“The bias will be to their mother market, where they have the connections to buy best-in-class. But domestic assets of size with their return requirements are rare,” he says. “They are now looking outbound.”

The Japan Post group, a behemoth with total assets of some ¥296trn, according to its 2015 annual report, is primed for a foray into overseas markets. Led by Japan Post Bank and Japan Post Insurance, the group has laid out a strategy to invest in alternatives, including global real estate.

In a clear sign of cultural change for the Japan Post group, a former Citigroup banker, Masatsugu Nagato, has been appointed president this year, not long after the arrival of Katsunori Sago, a former Goldman Sachs executive, as head of asset management.

“Sago is pretty aggressive. He is ready to go,” observes a senior executive with a large Japanese real estate group. A key operative in Tokyo property circles, the executive told IPE Real Estate: “Japan Post group is moving very fast. They may start manager selection very soon and will be all set to start investing from next financial year [April 2017].”

The source, who advises some of Japan’s largest financial institutions, said: “I expect Japan Post will hire gatekeepers – and they will invest with their chosen managers. The capital will most likely go to the biggest core managers. Japanese institutional investors will not have significant allocation interests in distressed, value-add or opportunistic funds.”

Muto says: “The advantage these people have is their purchasing power. Their ticket size is big, and this will give them access to quality assets.”

Ito agrees that these new giants will go for blue-chip, core real estate. “The reason they are giving up bonds is because of low yield; they are looking for higher-income yield from real estate,” he explains. “They want some liquidity with income, and, therefore, their preference will be for open-ended core funds.” Ito has also been working with institutional clients to map a plan for offshore investment.

Those who spoke to IPE Real Estate are unanimous in their view that capital flows out of Japan will start with a trickle as these conservative investors begin their orientation process – firstly, into alternative assets, secondly, to learn about the global market.

Muto says that although they have announced a 5% allocation to alternatives, it doesn’t mean they will have to invest that in year one, two or three. “They have high return hurdles,” he says.

“It is possible that some investors may start small with commingled funds – to get the hang of it while they build their investment platform. This gives them a conservative start and they won’t post big losses in the first two to three years. The real meat will come after that, when they will start to invest in joint ventures and clubs, along with sovereigns and global pension funds. They will be in the league of the Norwegian sovereign wealth fund or the Netherlands’ APG.”

Ito says: “The challenge for Japanese investors will be whether they can spend the money over the next few years.”

Preparing for the push

Considerably advanced in its diversification planning, GPIF is tipped to start appointing global managers early next year to look after its international investments.

Charlie Haase, managing director at Tokyu Land Corporation, says Japanese institutions are in their final stages of preparation to go offshore. “They have appointed people into key positions,” he says. “They don’t want to make any mistake coming out of the gate. But they are ready.”

IPE Real Estate understands that GPIF has given CBRE Capital Advisors a year-long mandate to familiarise its executives with trends in the global market.

Haase says: “The last time I spoke to GPIF, they were hoping for legislation that would allow them to direct their own investments and that they will not need to delegate authority to a trust bank. Whether that happens or not, they are ready to invest [in real estate].”

The smaller funds are perhaps slightly more nimble and a somewhat ahead in their planning. The Pension Fund Association for Local Government Officials (Chikyoren), for example, has already chosen UBS Asset Management as its international manager for real estate.

The Federation of National Public Service Personnel Mutual Aid Service (KKR) and Mutual Aid Corporation for Private Schools of Japan (Shigaku Kyosai) are in various stages of picking offshore managers for their overseas bonds and equities investment.  Appointments of real asset managers are expected to follow.

Advisers to Japanese institutions are guiding them to sophisticated, deep and liquid markets: the US, UK, continental Europe, Australia and maybe Canada.

“Even in those markets, their preference will be gateway cities,” says Ito.

But don’t expect a repeat of the buying frenzy of Japan’s bubble era when Japanese investment made headlines around the world with trophy assets like the Rockefeller Center in New York. This time around, the investment objectives are very different.

Hideyuki Sato, managing director at Tokyu Land, says the large Japanese trading houses and their subsidiaries have been investing overseas for many years. He points to the likes of Mitsui Fudosan and Mitsubishi Estate which, between them, have assets of more than US$4bn in the US. Others including Unizo and NTT Urban Development (a subsidiary of Nippon Telegraph & Telephone Corporation) have started to make overseas acquisitions of their own, he adds.

According to Real Capital Analysts, Unizo has spent US$833m on four office buildings, mostly in Washington DC, in the past 12 months. But Blazkova has also found that many potential investors are still more focused on their home market because of the 2020 Olympics, which they expect to generate considerable activity over the next three years.

But in the longer term, Japanese developers realise that their home market, which represents 95% of their business, will continue to shrink because of Japan’s demographics.

“They have to go overseas to survive,” says Sato. “They look for diversification and they usually target returns of 8% or above, depending on the market.”

Muto says: “Investors whose basic business is in property will go offshore to invest in real estate developments and joint ventures to broaden their own business. Some will buy assets for investments, but their strategy is different to those who hold assets for income yield.”

For all the potential, however, Japan is not exactly on the radar of the global funds management industry.

Ito believes that less than 10% of global fund managers are prepared for the capital flow out of Japan. The rest, it seems, are quite oblivious. This raises the question: is the global market ready for this advent of capital? 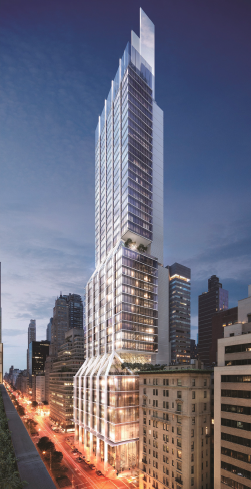 Hitoshi Uemura, chief executive of Tokyo Land, could see the potential in redeveloping the site. It was the first city-block development in Midtown in 30 years.

“It is a unique project in an irreplaceable location, and he decided that we should become involved with it,” says Charlie Haase, managing director.

Tokyu Land joined a three-way partnership with the US developer L&L Holdings and Greenoak Real Estate Advisors to redevelop the property.

Construction started last year, with MassMutual Financial Group providing a US$556m (€509m) construction loan for the new 47-storey office tower. The project is due for completion in 2019.

The project is one of the largest overseas real estate investments in the history of Tokyu Land.

Tokyu Land first went to the US in 2012, picking up projects opportunistically with the intention of exiting within a few years with capital gains. Among the assets acquired are a 1,300-unit multifamily project in Houston, and an office in Pasadena in California.

Haase heads a team whose role is to turn its investment activities in the US into its own independent business. But the group has not yet decided on any particular asset class to pursue, only that it wants to be in major cities.

“For us, it is more important to select the right partner than any particular asset class,” says Haase.