Prompted by the government to put idle capital to work and by low domestic interest rates, Japanese investors are looking to invest in property and infrastructure assets. Many investors are starting to look globally, with some of the largest government funds searching for managers to run global or regional mandates, and others making acquisitions to bring global expertise in-house.

Japan is one of the largest property investment markets in the world, at the centre of which is Tokyo. According to Nomura Research Institute (NRI), the city anchors a metropolitan area that is by far the largest in the world in terms of population, and virtually tied with New York City in total economic activity. Tokyo also hosts the second-largest number of Fortune Global 500 headquarters, trailing only Beijing. And 14 of the 200 largest Fortune Global 500 companies have their head office in Tokyo. By 2020, NRI says, Japan will remain the third-largest economy in the world, “and should not be ignored as an investment target”.

The corporate sector supports a vibrant Tokyo office market and is attracting many foreign residents. In both office and multifamily rental segments, NRI says a handful of Tokyo wards are attracting the majority of population inflows and property investment. A surge in international tourism to Japan has sparked investment in both Japanese-style inns and business hotels.

Tokyo is also at the forefront of logistics innovation, and the need for property tailored to handling the smaller lots typical of the e-commerce world is driving a boom in logistics supply – in 2013 orders for new buildings surpassed the pre-crisis peak, setting a new record each year since. Foreign logistics players and Japanese property companies are planning to build facilities adjacent to a series of new highways planned for Tokyo.

Underlying the investment activity and relative prospects for Tokyo property sectors is Japan’s changing population. In 2015, its population declined for the first time, NRI says, but the number of households is increasing. Younger people are establishing one-person households in Greater Tokyo, a trend NRI projects will peak as Japan ages: in 2015, one in four people were over the age of 65 in just four wards of Tokyo; by 2025 that situation will occur in seven wards, and in 21 wards by 2035. At the same time, the population is projected to increase by 2040 in only the three wards along Tokyo Bay, while NRI predicts that the population will decrease by 10% or more in seven of Tokyo’s 23 wards. Foreigners now account for nearly 40% of the population growth in Greater Tokyo and in Tokyo proper, three wards have foreign populations of 8-10%, compared with an average of 4.2% for the city overall.

About 20% of households in Japan now rent, and the percentage is going up, while the share of those moving to rental apartments is also increasing. In Tokyo, the population growth and household formation dynamics have pushed the vacancy rate on multifamily rental units in the city steadily lower since mid-2014, while vacancy in Tokyo suburban apartments has risen since early 2016 as new supply has become available. Overall rent levels have continued a slow decline that began in 2000, say NRI.

Tokyo’s main attraction is jobs. After several years, the economic stimulus policies of Abenomics began to work this year. Japan’s GDP rose 2.2% quarter-over-quarter on an annualised basis in the first quarter of 2017, the fifth quarter of sequential growth for the first time in 11 years. The growth was fuelled by a combination of consumer spending and exports. However, a recent research note from Goldman Sachs says: “Many overseas investors still believe that exports dominate Japanese GDP when, in fact, they account for just 17%.” Personal consumption accounts for 59%, private capital expenditure 14%, and private housing 3%, “meaning that private domestic demand represents 76% – the lion’s share of the economy”.

Two major factors are at work, says David Chen, managing director and head of real estate for Asia-Pacific at JP Morgan Asset Management. “One of the first ‘ah-has’ that I think people have with respect to Tokyo is that if you look at the city’s population dynamics, it’s still urbanising,” Chen says. “People are coming into the cities more and more to where the jobs are, where the economy is more dynamic, so the city is growing despite the overall population in the country decreasing.” 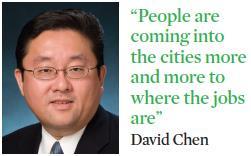 The other development directly affecting real estate is household formation, which is increasing at a faster pace because “people are moving out while they’re younger”, says Chen. “So there’s more demand for housing even though, again, you’ve got some other overarching demographics that seem to suggest otherwise.”

The trends converge in Tokyo’s office market, which accounts for 60% of office rental property in Japan. The only other city to hold a notable share of office space is Osaka, at just 15%. The Tokyo central business district (CBD) is concentrated in only five wards. While Tokyo office vacancy has fluctuated between 2% and about 10% since 2000, tending not to be stable for more than two years, vacancy rates in the five wards have trended steadily lower since January 2013, and are now below 6% in all five, and back to 2% in one ward, according to data from Miki Shoji, a Japanese office leasing agency.

At first glance, that data suggest a very tight market. But the situation is more nuanced. “For investors, I would say that people do hear about cap rates being low, and that would imply very expensive valuations,” says Chen. “But when you match that up with the fact that rents are actually still well below their peak, those two factors combined means capital values can still grow even though yields are at a lower end of the range than they’ve been historically.”

The balance, of course, is risk assessment and astute underwriting of assets. “When you look at the overall Tokyo office market, we’re still seeing rents that are sometimes 30% to perhaps 35% below their prior peak around the time of the global financial crisis,” says Chen.

“Therein lies the caveat,” he adds. Investors must be “very careful about the types of buildings for which they would actually project significant rental growth, even though its rate might be 30% below peak because of the significant amount of new supply coming on line in the near future.”

A key part of the analysis for Tokyo property is the spread between borrowing costs and cap rates. The Bank of Japan’s aggressively accommodative monetary policy of the past few years, including a period of targeting a zero interest rate on the official policy rate, has kept the cost of yen funding low. “The spread between cap rates and yields, versus where they’ve been at the local borrowing rates, is still wider than it’s been historically over the last 10 to 15-year average,” Chen says. “There are still opportunities in Tokyo office property – as long as you have quantified risks you’re taking and how you’re underwriting those.”

The consolidation of property markets in Tokyo comes as property takes centre stage in Japan’s financial markets. One way the Bank of Japan has been implementing its accommodative policy is through direct purchases of Japanese real estate investment trusts, which has supported the property market and encouraged institutional interest in property investment. At the same time, some investment bankers believe the government’s corporate governance reform initiative may prompt Japanese non-financial corporations outside the property sector to evaluate the sometimes significant property holdings on their balance sheets.

Japan Post’s recent statement of interest in acquiring a stake in Nomura Real Estate Holdings is seen as an effort by the postal company to generate more income from its property assets – which include more than 20,000 post office locations across Japan – to offset declines in its core mail-delivery business. Japan Post has already redeveloped a major post office near Tokyo station as a commercial building, and begun developing urban condominiums. Nomura Real Estate’s expertise could accelerate that process.