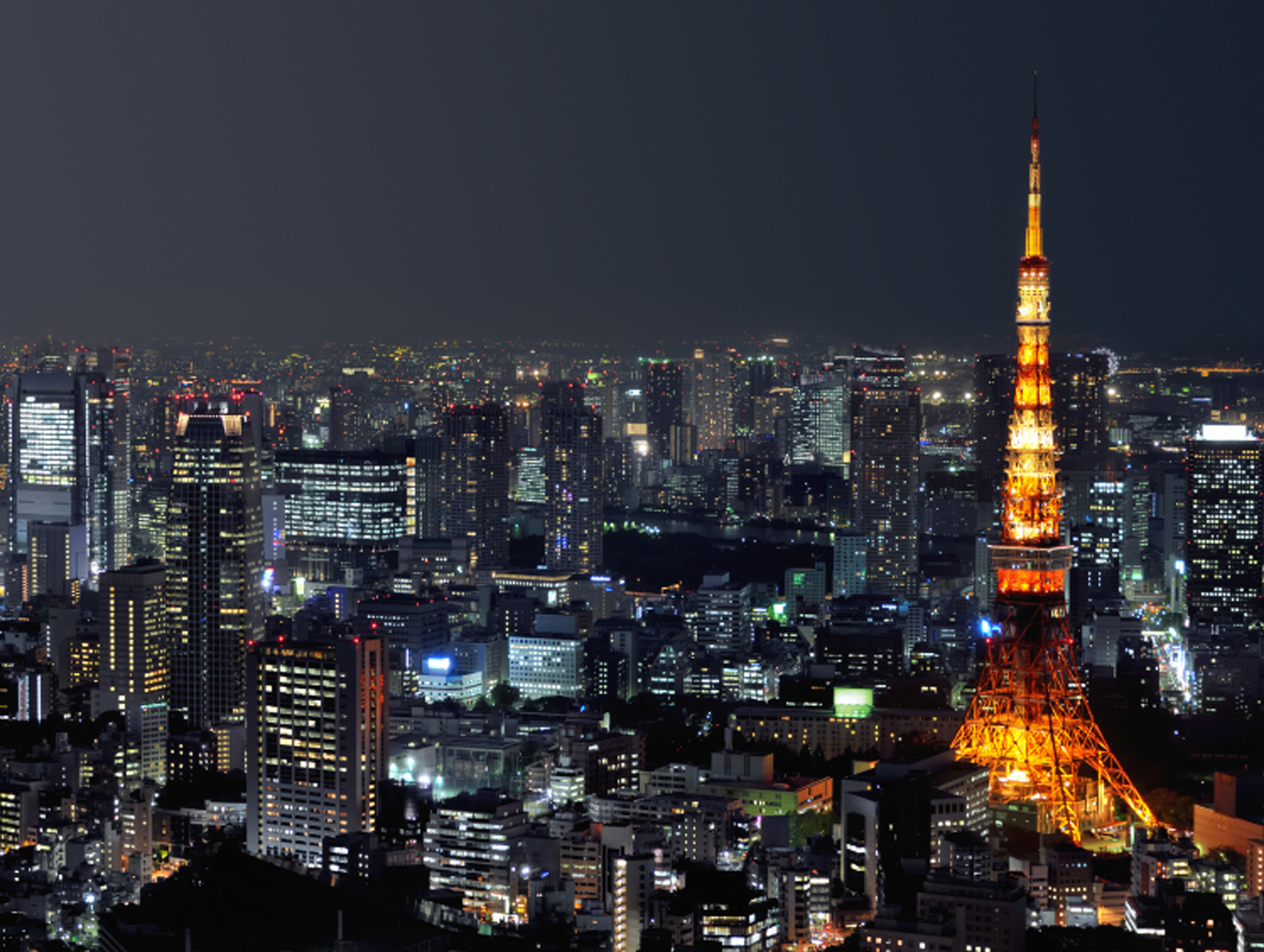 Some 35m people call Tokyo home and the capital of Japan has a bigger GDP than both Spain and South Africa. And now that Japan seems to be leaving behind its decades of deflation, economic stagnation and strong currency, prospects are improving.

An important stimulus has been the economic policy of prime minister Shinzo Abe, so-called Abenomics. Abe came to power in late 2012, promising change in the form of ‘three arrows’ – new fiscal and monetary policies and structural reform. The first two arrows seem to have hit their target; the government-backed programmes of fiscal stimulus and looser monetary policy, which has the Bank of Japan pursuing a target of 2% inflation, seem to have finally kick-started the economy.

Low interest rates are helping financing, with the result that investors have been flocking to Tokyo’s real estate market. Cap rates are compressing across all sectors; figures from CBRE’s quarterly survey of expected yields by real estate investors in January 2014 show cap rates of prime office in Otemachi at 4-4.3%, the 12th quarterly decline from April 2011’s level of 4.3-4.7%.

“Vacancies are constantly coming down in the prime offices market”

Tetsuya Fujita, managing director and country manager for Japan at CBRE Global Investors, says: “The attitude of lending institutions is very aggressive in lending into real estate at very low interest rates. The business conditions for real estate companies have been improving since Q4 2009, and this trend remains sustainable.”

Abe’s third arrow – structural reform – will require a steady aim. But Japan needs changes to improve its productivity and become more competitive. The programme is under way: a special zone in Tokyo is being set up to attract companies to relocate their Asian headquarters there by reducing the corporate tax rate and offering financial incentives. The aim is to attract 500 foreign companies by 2016.

The coming of the Olympic Games in the summer of 2020 is providing another boost to the city’s real estate market with plans for upgraded infrastructure, including a possible fifth runway at Hareda airport, and new sports facilities and accommodation for athletes on the Tokyo waterfront.

The effects of the economic change are remarkable. JLL reports that Japanese real estate transactions reached ¥4trn (€28.3bn) in 2013, twice the rate recorded in 2012. The majority of these transactions covered the Greater Tokyo market, which comprises the city itself, plus three prefectures. The figure for Greater Tokyo is ¥2.9bn in 2013 compared with ¥1.6bn in 2012.

Akihiko Mizuno, head of capital markets, Japan, at JLL, says the Tokyo market differentiates itself from the rest of Japan by its size. “It’s by far the largest real estate transaction market in Japan,” he says. “A lot of foreign and domestic investors prefer assets in Tokyo, the main reason being that they believe Tokyo will remain strong and will lead the rest of the country in recovery. With the 2020 Olympics, it will get even stronger.”

Masanobu Fujita, division head of business development at Diamond Realty Management (DREAM), points to two further advantages of the city compared with the rest of the country – demographics and infrastructure. “The Japanese population is decreasing, but in Tokyo it’s increasing and has been for decades,” he says. “In greater Tokyo young people come to study and stay to work. And the infrastructure is superb. You are always within 500 metres of a subway station.”

J-P Toppino, head of PAG Real Estate business, whose real estate company Secured Capital invests predominantly in distressed real estate assets and debt in Japan, cites low interest rates as a major attraction of the market. “Debt financing is extremely attractive with low to moderate debt available at less than 1% all-in, making Tokyo one of the most attractive markets in the world in terms of cash on cash yields,” he says.

The Bank of Japan’s quantitative easing has encouraged Japanese REITs, and its purchase of J-REIT shares has injected liquidity into the market. The Topix REITs index soared by a third over the course of 2013. But this has created strong competition for the kind of core assets bought by J-REITs.

The result is that other investors have been forced to look to other types of assets. Tetsuya Fujita says: “We are competing with J-REITs, which have been very active. But still we have opportunities here, because of the big size of the Tokyo market. Selective opportunities may exist to target those assets with leasing risk or potential for repositioning. These are things that J-REITs are not able to acquire, given their investment criteria. J-REITs like income-producing property. They don’t want to buy properties with low occupancy that will negatively impact their dividend return.”

These sentiments are echoed by Frank Khoo, global head of Asia at AXA Real Estate. “We focus on prime property,” he says. “With demand starting to pick up we might do a bit more core-plus and value-add. Two years ago I might not have been prepared to take some leasing risk, but given the fact that demand is now very strong, and with vacancy rates falling and rents starting to pick up, it’s maybe the right time in the cycle to take a bit more leasing risk. You can take some leasing or repositioning risk and try to push the asset into the core space where there is big demand.”

Other investors have had a different reaction to the shortage of core assets. They have been persuaded to cast their net wider to look for assets outside Tokyo. Mizuno says: “Buying a prime office building is very difficult; they don’t often get sold on the market. People who really want to invest in Japan are looking outside Tokyo now. Compared to a year or two ago, I think investment into cities like Osaka and Fukuoka is increasing.”

It is not all good news, though. One blot on the rosy picture is the government’s raising of the consumption tax from 5% to 8% on 1 April, with a further hike to 10% due to kick in in October 2015.It is the first rise in 17 years but there is a certain amount of confidence that it will not knock back economic recovery.

Mizuno is sanguine about the effects: “It was decided a year ago, and the government carefully planned how to soft-land any possible negative impact a consumption tax might have. People accept it because an increase was required to tackle our huge deficit. There was a lot of spending in March prior to the tax. We might see some decline in the coming quarter, but the economy is prepared to take the increase.” But Mizuno cites other risks that might threaten the recovery. A big one is whether Abe’s reform programme will be successful. “It’s not easy,” Mizuno says. “It takes a lot of time, a lot of stakeholders are involved and it needs a lot of consensus building to change historical rules. That is the challenge for Abe’s government this year.”

After the global financial crisis, residential property recovered first, followed by logistics and office. Tokyo residential has particularly benefited from the influx of buyers squeezed out of other parts of Asia, according to Khoo. “Traditionally, Japanese residential has just been bought by the Japanese. But recently we have seen Hong Kong, Singapore and Chinese buyers coming in. They can’t buy in their home market because of restrictions. Tokyo is becoming more globalised on residential space.”

GE Capital Real Estate has historically focused on two types of properties – multifamily residential properties and mid-size office properties. Francois Trausch, CEO of Japan and Asia Pacific, says: “Regarding MF properties, we focus on smaller units such as studios and onebedroom as they offer low vacancy and stable rent. In addition, MF investments achieve an attractive yield pick-up between property yield of 4.5-5.5% and financing rates below 1%. As for office assets, we focus on mid-size assets requiring active asset management through lease-up and cap-ex. We do not target prime assets. This is where J-REITs and domestic developers are investing. Their target hurdle is much lower than ours, so it won’t make sense to compete with these players.”

The vacancy rate for Tokyo prime offices is edging down, which should be good news for rental levels. A-grade office rents have already started to rise, and expectations for rent increases are high.

Tetsuya Fujita says: “Office rents are bottoming out of the cycle. Tokyo office presents a favourable entry point for investors because of the potential for growth of office rents in the future. Vacancies are constantly coming down in the prime offices market. The most recent vacancy rate for class-A offices in inner Tokyo is headed toward 6%. Historical data shows that once the vacancy rate reaches 5% then market rents enjoy more uplift. We are hoping to see that soon.”

DREAM, the private equity real estate arm of the Mitsubishi Corporation, manages $4bn of investment in Japanese real estate, more than 80% of which is in Greater Tokyo and its focus is on the industrial and retail sectors. The investments are managed mainly on behalf of domestic institutional investors, such as financial institutions, pension funds and insurance companies, although it does have European, American and Australian investors.

So why the focus on industrial property? “For offices in Japan, the average lease terms are generally two to three years – very short,” says Masanobu Fujita. “In logistics assets, you can have longer leases of more than five years, which give more certainty. Office is more of a macroeconomic play, whereas logistics is a stable-yield play.”

But the longer leases without rental reviews, which are common for logistics assets, could be a liability if inflation picks up, says William Hsu, manager at DREAM. “Because it’s customary to have long-term leases at a fixed rate of rent, it doesn’t give one any protection if inflation occurs. For the last 20 years, it has been a deflationary environment, so it hasn’t caused any problems, but I think it’s a potential risk.”

But for Erle Spratt, fund manager of M&G’s Asia Property Fund, both office and logistics in Tokyo look relatively expensive. “We have seen what’s happening to capital flows in logistics,” he says. “We need to see rental growth and, given where the yields now sit on logistics properties, we are not seeing enough rental growth to be interested in allocating ourselves.”

Spratt rejects Tokyo office for similar reasons. “A lot of rental growth is being priced into asking prices,” he says. “Prices might reflect an initial yield of very low returns. If you pay a high number and are getting a low initial yield, you have to have growth coming through as you expect. If not, you are at risk of future capital loss.” For these reasons, M&G is looking to Osaka. “Osaka offers relatively good growth as well. The yield premium you achieve in Osaka makes an investment there less risky and more attractive,” says Spratt.