Visitors may find the Japanese city address system confusing but there is nothing perplexing about Osaka’s real estate market today. Like the proverbial ‘second city’ of any major industrial nation, Osaka has one objective: to punch above its weight. And it is reaping the benefits of higher rents and hotel room rates, and property yield compression.

Though Osaka only recently allowed construction of 100m high-rise buildings along its historic central boulevard, the city is rapidly challenging Tokyo’s position as Japan’s iconic cityscape. Tokyo Weekender, a website that caters to English-speaking travellers, says viewers in the capital were dismayed to learn that The Night Movie Channel of Osaka, a time-lapse video of glittering skyscrapers and glowing neon signage that has gone viral on YouTube, was the nightscape of Osaka.

The video captures images taken from many of Osaka’s landmark buildings, illustrating how the city is building on its heritage as the commercial heart of Japan.

A glance at a map shows Japan consists of a series of islands, facing the Pacific Ocean on the east and the Sea of Japan on the west. The largest island, Honshu, is home to most of the major cities, which are dispersed across five major regions. Tokyo lies on the Pacific side of Honshu in the Kanto region, which includes coastal plains. Osaka lies closer to the Sea of Japan in the Kansai region, which includes the cities of Kobe and Kyoto.

“Though Osaka only recently allowed construction of 100m high-rise buildings along its historic central boulevard, the city is rapidly challenging Tokyo’s position as Japan’s iconic cityscape”

Augmenting its position as Japan’s historical centre, Osaka has in the past several years moved rapidly into the future. The completion in 2013 of Grand Front Osaka, a sprawling commercial complex north of JR Osaka Station in the Umeda district, illustrates how the city and property developers have collaborated on a major redevelopment project that will transform a former freight rail yard north of Osaka Station into a new, modern city district.

The Dotonbori district, with its iconic neon advertisements, is a principal tourist destination and sign that Osaka can give Tokyo’s economy a run for its money

The first phase consists of a wide variety of shops and restaurants, an Intercontinental hotel, office and event space, and a residential tower. Elevated walkways connect Grand Front Osaka buildings to each other and to Osaka Station. The redevelopment is expected to be completed by 2025.

Provoking a skyline rivalry and completing ambitious redevelopment projects are certainly signs of Osaka’s economic vibrancy, although it will be some time before Osaka knocks Tokyo off its pedestal as Japan’s premier city. A board member of one of the leading US-Japanese business and cultural associations in the US likens Osaka to a combination of Chicago and Pittsburgh, blending commercial and industrial brawn, while Tokyo is akin to the money and power nexus found in Washington DC and New York.

According to JLL’s City Research Center, Tokyo comprises the largest single economy and consumer market in the world. With GDP exceeding $1.4trn (€1.2trn) – as large as the economy of Spain – and nearly 38 million consumers, Greater Tokyo’s domestic market far exceeds even that of New York, London or Paris. And while it is common for most Japanese companies to maintain dual offices, with operational capabilities in Osaka and corporate functions in the capital, JLL says the Tokyo region is also home to more Forbes Global 2000 headquarters than any other city.

In JLL’s ranking of 20 cities, Osaka was 17th in GDP terms and ranked 14th in the number of headquarters. It did not make the list in terms of population. “Tokyo’s global competitive position is fundamentally tied to its unique economic scale as the world’s most populous city,” says JLL.

But there is no doubt that Osaka and its property market are enjoying a strong run.

Underlining the strong demand in the region, the vacancy rate for industrial and logistics property in the Greater Osaka region fell to 0.4% in the third quarter of 2014, a drop of 0.4 points from 2013, according to CBRE. What is more, says CBRE, one of the benchmark industrial projects in the region, the Mitsui Fudosan Logistics Park, slated for completion in the fourth quarter of 2014, was almost fully leased by the end of September 2014, much earlier than expected.

Japanese companies across a variety of industries including consumer goods, electronics, building materials and manufacturing are moving to improve their distribution efficiency, resulting in a tight supply-demand balance that has enabled some property owners to sign tenants at slightly higher rents. With large amounts of supply scheduled in the near future, CBRE says owners are trying to raise rents while new supply remains low.

Tenants are also seeking large-scale logistics facilities that can accommodate consolidation of operations, as well as general expansion. Big spaces in Osaka are on the order of 10,000 tsubo or more. The denomination of industrial space serves as a reminder of the importance of culture when doing business in Japan. The tsubo is a commonly used unit of measurement for property in Japan, equivalent to 3.306sqm or the area of two standard tatami mats.

“Provoking a skyline rivalry and completing ambitious redevelopment projects are certainly signs of Osaka’s economic vibrancy, although it will be some time before Osaka knocks Tokyo off its pedestal as Japan’s premier city”

One of the new projects that may help restrain industrial rents in 2015 is the recently announced plan by Itochu Corporation to build a large logistics facility of 40,000 tsubo in Sakai, a city in the Osaka Prefecture that has been one of the biggest and most important Japanese seaports since the medieval era. Already a large player in ‘build to suit’ logistics facilities tailored to tenants’ needs, Itochu expects broad demand for state-of-the-art property to continue to increase. To help develop multi-tenant facilities, Itochu last year formed a joint venture with Singapore-based Mapletree. The Sakai facility, due for completion in 2016, will be the venture’s first project.

While features will vary between properties, the new facilities are typically earthquake-proof structures that include anti-flood measures to protect against tsunami and tidal surges, and well water to deal with water-service interruptions and backup power supply to keep operations humming in the event of power outages.

Mitsui Fudosan and Itochu are both considering establishing industrial or logistics real estate investment trusts (REITs) to tap additional capital for project development and provide an additional potential exit for leased-up properties. They would join a crowded field.

Osaka’s property developers are also looking to the REIT market for capital for office, hotel and other commercial property. Sekisui House, headquartered in the Umeda Sky Building, announced in October it had received approval to launch a REIT that would invest in commercial facilities, hotels and other property in Japan and overseas, with a focus on domestic offices.

“Osaka’s property market is enjoying a strong run. Just as the train station is the centre of the sprawling new Umeda city district, Osaka itself is the centre of the Kansai region, Japan’s commercial and industrial heartland, and demand for space in both sectors is strong across the region”

“We deem launch of and linkage with REIT businesses focusing on commercial properties to be one of the important strategies for improving profit margin and efficient use of assets in our development business,” Sumitomo said in its announcement. 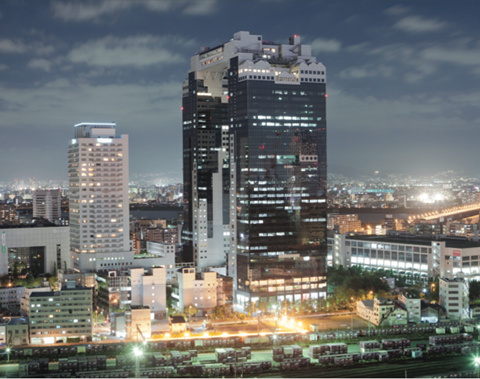 The Sky Building, famed for its connected twin towers and futuristic architecture, dominates the cityscape of the Umeda district as a demonstration of Osaka’s growing economic ambition

The venture into office and commercial property marks an expansion for Sekisui, the top brand in the Japanese housing market. The company was expected to record net sales and operating income in the current fiscal year ending January 2015. Residential development will remain a mainstay of Sekisui’s business. A subsidiary, Sekiwa Real Estate Kansai, is planning to complete a mixed-use building by 2016 that will be the first to take advantage of new Osaka regulations permitting buildings as high as 200m along Midosuji, Osaka’s luxury boulevard.

The 50m-wide avenue, completed in 1937, was intended to be a commercial and high-end retail zone. Although residential use was not expressly prohibited, there was a tacit agreement between the government and landholders that it would not become a residential area. In order to preserve the appearance of Midosuji, there was a 30m height limit imposed after the war, which was raised to 50m in 1995, and buildings over 50m must be set back from the street.

When the new height limits were announced in 2013, city representatives told local media they hoped Midosuji could become Japan’s version of Manhattan, with greenery equal to the tree-lined Champs Elysées in Paris. It is perhaps no wonder that, just a few years later, Osaka is vying to become Japan’s most recognisable skyline.