A long-time investor in China, the Singapore developer believes that opportunities are as abundant as ever. Florence Chong reports

For over a quarter of a century, the Singapore-based CapitaLand Group has ridden the fortunes of China to become one of that country‘s top commercial real estate developers – and possibly its single-largest foreign property investor.

Given a more mature Chinese economy, with growth lower than in the past, how is this level of exposure going to impact on future Capita- Land returns? “Economies at different levels of maturity present different opportunities,” says Lucas Loh, president of CapitaLand’s business in China.

“While uncertainties in the global environ- ment could cause some pressure in the short term, we are confident that, in the medium- to-long term, China will continue to offer deep opportunities,” he says.

“Geographically, we have identified five core city clusters on which to focus our growth.” They are mainly first-tier and second-tier cities: Shanghai, Hangzhou, Suzhou, and Ningbo; Beijing and Tianjin; Guangzhou and Shenzhen; Chengdu, Chongqing and Xi’an; and Wuhan.

“The dynamics of these cities present different opportunities, and our projects reflect strong performance and interest from the individual markets,” says Loh. “For example, the retail component of Raffles City Chongqing, which opened in September 2019, reported as high as 95% committed leases at its launch.” 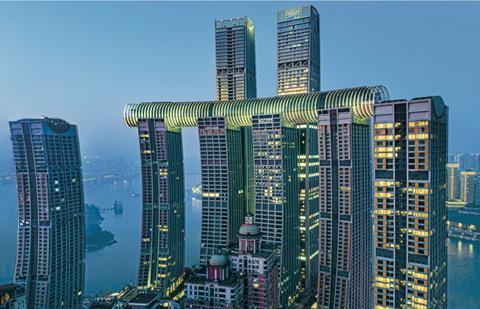 CapitaLand’s Raffles City Chongqing was opened in 2019, with 95% of its retail space leased

More than other foreign investors, Capita- Land develops and retains ownership of landmark retail assets throughout China, trading mainly under its Raffles City brand. It has been in the front line of the battle for the consumer dollar as Chinese consumers switch to shopping online. The group has not just weathered changing shopper habits, it has continued to perform well, according to Loh.

He explains why. “China’s sustained rapid urbanisation and the relatively smaller size of Chinese apartments have helped increase demand – because the malls also offer spaces for people to meet and socialise.”

The Chinese penchant for shopping centres is reflected in CapitaLand returns to September 2019. It achieved year-on-year net property income growth of about 14% for its China malls.

With the number of middle-income house- holds with higher disposable income continuing to increase, Loh says, Chinese consumers are also more sophisticated, and taking to aspira- tional and experiential shopping.

Rising affluence in China is also driving growth in CapitaLand’s tourism-related inter- ests. China is now the top global market for CapitaLand’s hospitality and lodging business, Ascott Limited, which is one of the world’s leading international lodging owner-operators.

The Chinese constitute almost a quarter of Ascott customers, and it continues to be the fastest-growing segment, Loh told IPE Real Assets.

In China, Ascott either owns or operates more than 25,000 lodging units in 130 proper- ties in 34 cities. The Ascott portfolio ranges from serviced residences to hotels, co-living properties and apartments for corporate lease.

For CapitaLand, staying power is paying dividends. Loh says: “CapitaLand has success- fully developed a series of investment vehicles focusing on China assets by leveraging its familiarity with the market and its established developer-owner-operator capabilities.”

In April 2019, CapitaLand Asia Partners I (CAP I) – the group’s first discretionary real estate equity fund – was launched to invest in value-add and transitional office buildings in the key gateway cities of China – and elsewhere in Asia. “Our capital-management capability has been a key success factor in delivering mega-projects with longer development hori- zons,” says Loh.