The city has a history of change. San Diego’s latest transformation is fuelling its commercial property market, writes Christopher O’Dea

Favoured with a mild oceanic climate and one of the best natural deepwater harbours in the world, San Diego’s history is inextricably linked to the sea. It was the capital of the global tuna fishing trade until the 1970s when lower-cost Asian competitors overtook the US. Today it hosts the only major submarine and shipbuilding yards on the West Coast,

and is homeport for the largest naval fleet in the world – and one that is bound to grow as the US continues its strategic pivot to the Asia Pacific region.

The commercial, military and naval activities that arise in such a setting have largely determined the location of San Diego’s downtown, its neighbourhoods and transportation network – and thereby the key trends in office, residential and industrial property. The city’s location on the border between Mexico and the US has also shaped the nature and scope of property development in light of increased trade and population flows between the two countries.

In the 500 years since Spanish explorers set up shop, the city that became modern San Diego has been through constant transitions. The city existed as a Spanish colonial outpost, a popular Franciscan mission, and an isolated Mexican town before becoming part of the US when California joined the union in 1852. The tumult continued, with the city going bankrupt shortly after, and operating as a ward of the state until rail connections ushered in prosperity.

Today there is no sign the city is losing its dynamism. In fact, a new wave of entrepreneurial activity is under way, and it is showing up in San Diego’s commercial property markets. 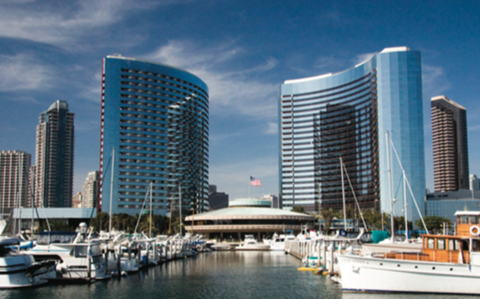 San Diego’s development has been inextricably linked to the sea

The current transition in the San Diego economy is the emergence of a world-class life science and biotechnology sector, driven by the presence of the University of California San Diego Medical Center. It is the second-largest employer in San Diego, trailing only the US Navy, accounting for nearly 28,500 jobs in 2015, compared with nearly 29,950 for the navy.

The strong job market has pushed office and industrial market fundamentals to new records in 2016. The demand for space is cascading through these two key property sectors as record-low vacancy rates and changing preferences spark investors, developers and occupiers to devise workplaces that meet prevailing design and amenity standards.

Dominating the San Diego market is the construction of ‘creative industrial’ space. To attract tenants and to compete with more progressive buildings in the market, CBRE Research says, “landlords see older obsolete or opportunistic industrial buildings as the perfect canvas for the type of open collaborative office space many tenants are beginning to expect.”

Fundamental data illustrate why the property community is turning to old industrial buildings to create offices. Office property in San Diego posted a vacancy rate of 12.5% during the first quarter, as the largest quarterly net absorption of office space in nearly a year pushed the city’s office vacancy rate to the lowest level since the third quarter of 2006, according to CBRE Research data. Class-B space accounted for the majority of the net absorption, reflecting a tightening market for top-tier space.

Hospitality showed the only soft spot in the San Diego market recently. The number of hotel transactions in Diego County dipped 38% in the first half, reflecting the absence of buying interest from listed property companies that suffered share price drops earlier in the year, according to Atlas Hospitality Group, a consultancy based in Orange County, CA. In San Diego County, the largest of the 10 sales during the first half was the 284-room Marriott Del Mar, at $80.5m (€71.7m), compared with the $259m sale of the 400-acre Grand Del Mar resort in Carmel Valley in the first half of 2015. 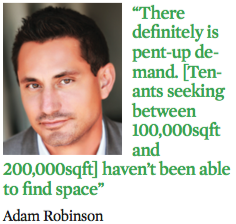 Despite a summer slowdown in absorption caused by some large occupiers vacating space in the central business district, CBRE says, San Diego office asking lease rates climbed to a new record during the second quarter, as year-to-date net absorption for 2016 surpassed total net absorption for 2015. The largest office property transaction in the quarter was UC San Diego’s purchase of Torrey Pines Court, a five-building project totalling 216,476sqft, following a $27m renovation by The Muller Company to reposition the buildings. According to CBRE, the “transaction is additional evidence of UC San Diego’s expansion throughout San Diego.”

As indicated by the strong take-up of class-B office space, economic growth over the past several years has squeezed supply in the San Diego market, paving the way for new construction. “There definitely is pent-up demand,” says Adam Robinson, founder and principal of RAF Pacifica Group, a San Diego-based commercial real estate firm that specialises in developing creative industrial space in San Diego. Tenants seeking between 100,000sqft and 200,000sqft “haven’t been able to find space”.

With a partner, Robinson owns a portfolio of properties renovated over the past six years totalling approximately 3m sqft. He founded RAF Pacifica to conduct development as the supply of property to renovate tightened. The company has acquired land and has 1.1m sqft of creative industrial space in various stages of development, primarily in the Carlsbad market north of the city centre and harbour.

While biotech firms are the top employer in the area, Robinson says the economy is well-diversified, and tenants include manufacturing, food production and personal and consumer products companies.

The new format, Robinson says, delivers a true corporate headquarters combining creative office space with state of the art industrial warehouse space including 36ft clear height ceilings – something that was not possible within the structures of even the best renovated space. “Many occupiers have a true office, where they employ engineers and other staff, and they have a warehouse somewhere else,” Robinson says. New space also integrates the two – and adds all the amenities that constitute a competitive workplace. In San Diego, he says, that means a healthy dose of outdoor features suited to the city’s benign climate.

Such features typically cater to millennials – and there is no shortage of that age cohort in San Diego. In fact, JLL says millennials comprise 27.1% of the city’s labour force, second only to the millennial mecca of Austin, where they comprise 28.4%. Landlords are investing to “improve and amenitise buildings with the addition of common areas and features to take advantage of outdoor space, therefore justifying higher rents,” CBRE says. “As employers place more emphasis on workplace strategy, employee wellness and talent retention, they are willing to allocate more capital to a workplace that embodies these features.”

The prospect of achieving higher returns from next-generation product in a constrained market like San Diego is prompting changes in tenant and investor behaviour, CBRE says. “Landlords are motivated to increase occupancy and tenants are looking to renew early.” This effect is most evident for traditional office product, as progressive office options take the lion’s share of tenant demand. “A new trend emerging from institutional owners,” says CBRE, “is the want or need to fill buildings while being more flexible with asking rates.” With asking rates “substantially increased, it is more important to ensure occupancy and cash flows for the future”.

While overall demand is strong throughout most suburban office submarkets of San Diego, Colliers International notes that downtown San Diego continues to attract start-up tech tenants and even some traditional mainstay tenants such as legal firms. But pricing is taking a curious turn. “The expanding millennial workforce is driving demand for non-traditional office spaces in preference to the best located fully-amenitised class-A high-rises with some of the best view corridors,” according to Colliers’ Q2 market report. The demand for non-traditional office space is so strong that in repurposed old industrial buildings in parts of central San Diego “rents are even exceeding those of the some of the finest office locations in all of downtown”.

This latest chapter in San Diego’s evolution is just beginning. The integration of creative office standards with warehouse property “is influencing the next generation of industrial developments as well”, says Colliers. “Developers such as RAF Pacifica Group are leading the way in this segment,” Colliers says, projecting that “demand for highly amenitised industrial space will drive a sizeable portion of future development.”