The city’s office market was the first to rebound after the financial crisis and its housing is the most expensive in the US. Christopher O’Dea reports

The soon to be completed Salesforce Tower will be the tallest in the central business district of San Francisco. The 1.4m sqft building, named after the company that pioneered customer relationship management (CRM) systems, signifies more than the ascent of a tech start-up. The 61-storey development is one of several new office buildings that will bring 4.2m sqft of space to the market in 2017.

San Francisco’s property market was one of the first in the US to rebound following the global financial crisis. How the market reacts to the supply surge may provide indications to the likely course of other major US markets.

The city has recently recorded some high profile sales of office towers by long-term holders. For example, Principal Real Estate Investors sold the 264,859sqft 150 Spear building for $185m (€164m) after 10 years of ownership, and the State Teachers Retirement System of Ohio sold the 631,255sqft 44 Montgomery Street for $473m after holding it for 20 years. Were these sales linked to concerns about the future of the market or examples of investors taking profits?

A period of subdued rental growth and higher vacancy lies ahead for San Francisco as the new supply is digested. But the lessons learned may end there. San Francisco’s tech-driven economy is unique among major markets in the US and globally. It also has an annual limit on new office supply (see A market constrained by geography and regulation), which helps prevent overbuilding.

While the San Francisco market is certainly not in a recession, cracks are starting to appear in the economy. A slight rise in office vacancy during 2016 caused rents to flatline after nearly a decade of mostly double-digit increases. The local economy – although still more robust than the US overall because of the preponderance of tech jobs – is decelerating. The housing market has become one of the most expensive in the US due to strong demand from tech workers – and, more recently, rising construction costs – so that even the highly paid professionals in Silicon Valley are unable to afford new units. 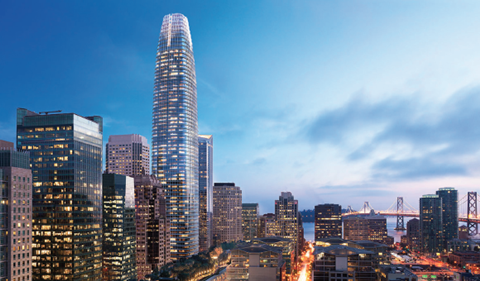 Salesforce Tower, due to open this year, is the tallest office tower in the San Francisco CBD

Financing costs are starting to rise too, and not just because interest rates are starting to go up. Regulatory pressure to rein in bank lending to the commercial property sector has slowed the flow of bank credit to developers, while alternative lenders charge higher rates for their capital.

“San Francisco has been running ahead of the pack,” says Eileen Marrinan, director of research at Grosvenor Americas, the US arm of the British property investment group, which owns about $3.5bn of property in the city.

Early to recover after the crisis, in large measure due to the strength of the tech sector, San Francisco was one of the first markets where new development was undertaken to accommodate demand for office and residential space as growth accelerated in the metro area. “It’s running a year ahead of other markets,” Marrinan says, “and it’s occurring across all the sectors.”

That new supply is starting to hit the market, mainly in the office sector. The 4.2m sqft of space coming to market this year is nearly three times the yearly average (1.4m sqft) of the past 35 years, according to Marrinan. “That’s going to be a major factor for the city this year,” she says.

Whether it is enough to push the San Francisco market into a recession is unclear. But “rents are going to go down”, Marrinan says. The metro-area office vacancy rate rose to 7.2% this spring from 6.2% a year ago. “But that’s still a tight market, and definitely not a downturn,” she adds.

Rents reacted rapidly during 2016 when venture capitalists reduced funding of start-up companies. To conserve cash, many start-ups abandoned empty space they had leased in anticipation of growth, putting it on the sub-lease market at rents below the prevailing rate for new lease commitments, but above the rate they were liable for under the original lease. That allowed some occupiers to benefit by taking new or nearly new space at rents below the cost of a direct lease. The initial rise in vacancy caused by this ‘shadow supply’, although only 20bps, was enough to stop office rent appreciation after five years of 11-20% increases that effectively doubled the average office rent.

The retreat of the ‘unicorns’ – tech start-up companies with billion-dollar valuations – was a key factor in the negative net absorption of San Francisco office space in the second half of 2016 and the first quarter of 2017. CBRE Research predicts that office vacancy could reach 9% by the end of 2017. But new supply is slated to drop to just 1.7m sqft in 2018, which would reduce downward pressure on rents.

The office market has now experienced four consecutive quarters of increased vacancy, according to Cushman & Wakefield’s first-quarter report on the market. Across the city the vacancy rate stood at 8.7%, a 70bps increase from the fourth quarter and a 300bps increase from a year ago.

It is not all bad news in Cushman & Wakefield’s view. “This uptick in vacancy gives breathing room to the considerable number of tenants searching for space in a market that was, by all accounts, overheating,” its report states. “High asking and effective rents, along with very few space options, had been giving tenants pause, forcing them to look beyond the city’s limits for their office requirements.” The firm reports that there were 31 large-block tenants looking for space of 50,000sqft or more. “These tenants, large or small, can now find some relief.”

The office market reflects the composition of San Francisco’s tech economy, Marrinan says, which includes relatively more start-ups than the established tech companies – such as Google, Facebook and Apple – that are based in Silicon Valley, the group of towns around San Jose, south of San Francisco. As start-ups develop, their rental requirements change – some put excess space on the sublease market, while others seek additional space to accommodate growth.

A forward-looking metric of sublease inventory, which includes all space being marketed, whether vacant or still occupied, rose from 1.5m sqft at the middle of 2016 to 2.3m sqft by the end of March 2017, Cushman & Wakefield data show. Sublease space now accounts for about 17.9% of all available space in San Francisco, compared with the historical quarterly average of 12.4%. But the strength of the tech sector means that space will not remain on the market for long. “A large percentage of the prime product that is built-out in good locations longer-term will likely be subleased before ever moving into vacancy statistics, as has been the case over the past year.”

That outlook illustrates the robust health of the tech sector. Many US tech companies issued convertible debt in the first part of 2017. The bonds, which allow owners to convert their stake to equity if the issuer’s stock price rises, are typically issued by growing companies when they expect positive results over the ensuing two to three years.

A Bank of America (BofA) report in May found that tech names accounted for 40% of the S&P 500’s gain in 2017, with 84% of technology stocks posting gains for the year. During one week in May, investors allocated nearly $1bn to tech stocks, BofA said, the highest annualised pace in 15 years.

The strength of the technology economy makes San Francisco an attractive property market over the long term, says Richard Kimble, regional head, Northwest investments at TH Real Estate, which opened an office in the city in 2013 to facilitate its investment activity there. “We’re big believers in this market for the long run,” Kimble says. Rooted in its universities and tech companies “San Francisco has a well-educated work force, one of the best in the country,” he adds.

The years of double-digit rental growth between 2011 and 2015, fuelled by the expansion of the tech economy, is clearly “not sustainable over the long term”, Kimble says. But at the same time, projects that came on the market between 2014 and 2016 have been absorbed.

TH Real Estate’s $2.1bn San Francisco Bay area office portfolio is 93% leased, on average, and the majority of the 11 buildings it owns are 100% leased. “There’s clearly been pent-up demand for space.”

If San Francisco absorbs the new supply coming to market this year, investors may breathe a little easier about where the current property cycle is headed. 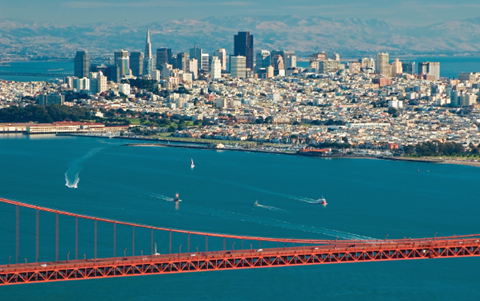 A market constrained by geography and regulation

The San Francisco office market has two barriers to entry that help ensure it is attractive to long-term investors. The most obvious is geographic. Bounded by the Pacific Ocean and San Francisco Bay, the city has no room to expand, and the southern boundary abuts the Silicon Valley market.

As important, are the regulatory barriers, namely Proposition M, which limits new commercial office construction in the city to 875,000sqft per year. Any amount that is not used rolls into the next year’s limit.

Limited new construction between 1992 and 2012 allowed the amount of allowed square footage to rise to accommodate the large supply that is now coming onto the market.