The City of Angels is home to a diversified economy, several sub-markets and pricing that is still attractive. Christopher O’Dea reports

With most headlines proclaiming the action in the US property market to be in the seventh-inning stretch, institutional investors will welcome the news that one of the largest property markets in the country is just getting warmed up.

For those not well-versed in US baseball, the seventh-inning stretch is when players take a break and weary fans stretch their legs before the last few innings of regular play.

Like baseball fans, investors in US property see the end of regular play looming. Multifamily property has posted strong performance over the past five years, cap rates on premium office property in gateway and large secondary markets have dropped below pre-recession levels, and industrial and retail property have benefitted as e-commerce has driven investment in new facilities. In search of returns, investors have been looking to markets with tech-driven growth, even in tertiary locations.

But now is the time for a carefully-planned shopping trip to Los Angeles, says Eileen Marrinan, director of research for Grosvenor Americas, who recently concluded an analysis of the city’s real estate market. For institutional investors that take the time to understand the nuances of the various sub-markets in what is becoming the largest metro area in the US, Los Angeles offers the potential to participate in a market where pricing and returns are still in early innings. “Los Angeles is much early in its recovery,” says Marrinan. “The city was hit very hard in the downturn, and was to slow to start recovering,” she adds. “But it’s definitely hitting on all cylinders now.”

The key to the recovery in Los Angeles is employment growth, Marrinan says, and the reason she expects positive performance in the years ahead is that the economy today is highly diversified, encompassing services, tourism, manufacturing, a robust financial services sector and a thriving tech cluster. The city has moved far beyond its historical dependency on the entertainment and aerospace industries, building on those legacies to make Los Angeles a job-creation machine. 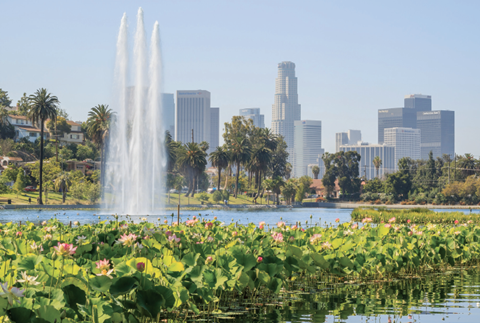 It is also the centre of a logistics and transportation network that encompasses nearly 20m people in an area ranging from the Port of Los Angeles and Long Beach – the largest in the US and the only one capable of handling the largest post-Panamax container ships.

“Real estate is all about bodies at desks, and Los Angeles has outpaced US employment growth in the past four years,” Marrinan says. With some institutions looking to markets like Salt Lake City, where tech-related industries are expected to create 80,000 jobs over the next five years, Marrinan says investors should “look at Los Angeles, which is likely to create 80,000 jobs in each of the next five years.”

In fact, CBRE Econometric Advisors says Los Angeles will post the strongest job growth among cities in the US over the next three years, forecasting the creation of 65,000 jobs annually. The unemployment rate in Los Angeles county was as high as 9.5% in 2013, Marrinan notes, and since then has been “dropping like a stone”, with the LA metro area adding about 95,000 jobs during 2015. By last November, CBRE Econometric Advisors says, the unemployment rate had dropped to 5.7%, from 7.9% in late-2014.

That means occupiers need space, and they’re soaking it up; despite a vacancy rate near 15%, office rents increased 7.2% in 2015 after posting a strong fourth-quarter gain, according to CBRE data. “This is an acceleration in rent growth from last quarter’s trend and is a sign we are well into the expansion phase of the cycle,” CBRE says.

The Los Angeles office market is unique among gateway cities. There is, perhaps, nowhere else where the adage that property investing is about ‘location, location, location’ is more applicable, with numerous districts featuring distinct profiles. “Because the city is so large, investors really have to pick sub-markets carefully,” says Marrinan. Density in Los Angeles is also very high – surprisingly for a city where most of the famous streets are boulevards built for large American cars. High density means most property projects, especially office property in the main business districts, are redevelopments, rather than new construction, she says.

This has made value-add a key theme in LA office investing, CBRE says. The uptick in rents has pushed some cap rates near 2007 levels, which “has resulted in rising investment activity in ‘value-add’ properties that give investors the opportunity to achieve adequate returns amidst a competitive low-yield environment”. 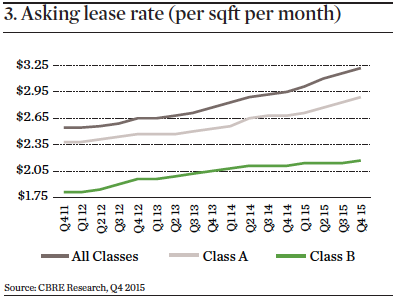 CBRE notes a “spike” in investor interest in Long Beach, a sub-market with buildings with the potential for conversion to creative office space. Investors that purchased such properties in the fourth quarter of 2015, “cited the desire to convert the properties into creative conversions in what they consider to be an up-and-coming market in Downtown Long Beach”.

Among foreign pension funds investing in Los Angeles, Ivanhoé Cambridge in the third quarter of 2015 bought the three-building PacMutual office complex in Downtown for a reported $200m. The purchase was the first in the city for Ivanhoé, the property investment unit of Caisse de dépôt et placement du Québec.

Ivanhoe, which executed the transaction through a venture with Chicago-based Callahan Capital Properties, said in a statement at the time that the PacMutual office complex would appeal to the city’s creative economy, and the deal helped fuel the creative conversion trend.

One of the strongest-performing sub-markets is West Los Angeles. With the largest office inventory at just over 50m sqft – and the second-lowest vacancy rate at 10.9% – the district “continues to be a very desirable market for tenants, especially technology, media and entertainment tenants”, CBRE says. This helped West Los Angeles shrug off a supply blip and post the strongest net absorption in the city in the fourth quarter. “Despite the fact that a large amount of space vacated in the market during Q3 2015,” CBRE says, “landlords continued pushing rents as strongly as in previous quarters.” The firm says investors should “look for rents in West Los Angeles to continue rising at a faster pace than the rest of the Greater Los Angeles market.”

The emergence of a robust technology and media sector illustrates the diversity of the Los Angeles economy. Originally a band of computer graphics firms supplying special effects to the movie industry, the tech sector in Los Angeles now attracts Silicon Valley heavyweights including Google and Facebook. While rents can be cheaper than Silicon Valley, the big attraction is the increasing convergence between IT, media and entertainment companies – the Los Angeles waterfront markets that tech firms prefer is known as Silicon Beach.

Ultimately, it is the diversity of the Los Angeles metro economy that is most attractive for institutional investors. With other markets that rebounded more quickly now starting to slow down, Marrinan says, Los Angeles presents a highly liquid market for quality assets where pricing is not dependent on the health of one or two sectors.

The breadth and the depth of the Los Angeles economy is perhaps best illustrated by the performance of industrial property. Anchored by the Port of Los Angeles and Long Beach, the largest in the US, the industrial ecosystem around the city is not just a way station for imports destined for shipment across the US, but an essential supply chain for a regional economy with nearly 20m people.

The Los Angeles industrial market is comprised of seven sub-markets where vacany rates fell below 1.5% in 2015, with the average asking lease rate rising 6.1% for the year, according to CBRE. “With steady demand,” says CBRE, “vacancy will continue to fall well into 2016 until a substantial amount of available space hits the market.” And despite a substantial amount of available property during the year, the overall market registered nearly 6m sqft of positive net absorption. This helped to “improve market fundamentals and tilt the market further into the landlord’s favour”.

Investors should take note: the tilt towards industrial landlords is going to get steeper this year. While developers are delivering new product to meet strong demand, CBRE says the availability rate for the Los Angeles industrial market will remain steady this year.

Industrial occupiers include third-party logistics, garment and apparel companies, food, electronics and general manufacturing tenants. While new supply is expected to provide a balance to the availability level – more than 2.8m sqft of space is under construction across the Los Angeles area and developers are expected to break ground for two large state-of-the-art buildings this year – CBRE expects it to increase by another 5.8% by the end of 2016.