Mass PRIM made its first direct deal without a third-party manager last year. Is this the start of a new trend? Christopher O’Dea reports

US public pension funds have long used pooled, or commingled, funds when investing in real estate. Even when many of their European counterparts began to eschew funds in the aftermath of the global financial crisis, US pension funds stayed loyal to the model.

Some of the larger funds invest directly in the market through separate accounts, but rarely have they sought to make direct real estate investments without the aid of third-party investment managers.

That might be changing. In December, the $62bn (€58bn) Massachusetts Pension Reserves Investment Management Board (Mass PRIM) made its first direct investment. It acquired 21 acres of land in Silicon Valley, including three office buildings, for $112m, without an external manager – although one of its managers, Divco-West Properties provided advice having brought the investment opportunity to Mass PRIM’s attention.

The transaction was part of the pension fund’s Project SAVE programme, which has reduced its fees and costs by an annualised $146m, according to Mass PRIM. At the time, Michael Trotsky, executive director and CIO at Mass PRIM, said: “By purchasing and owning this land directly, rather than through an investment manager, PRIM stands to save approximately $11m in investment management fees over the next 20 years.”

There are signs that other US pension funds are doing the same. Last year, the $55bn Alaska Permanent Fund said it planned to increase the share of assets managed in-house by up to 50% over next five to 10 years, from 24%. The target was part a new five-year plan that also raised allocations to property and infrastructure. Meanwhile, the South Carolina Retirement System is increasing its target allocations to real estate and infrastructure, while also evaluating the costs, benefits, risks and overall feasibility of managing core real estate internally without third-party managers. 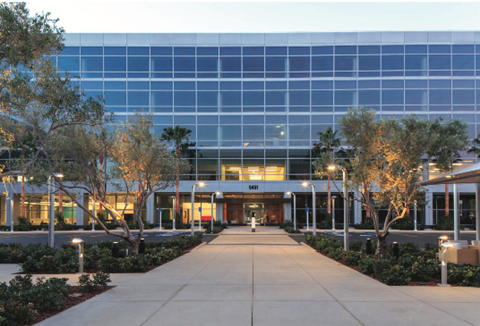 These moves come at a time when the $193bn California State Teachers’ Retirement System (CalSTRS) has been streamlining its relationship with external fund managers, including those in real estate. In 2016, CalSTRS announced plans to withdraw about $20bn from external fund managers in a range of asset classes, saying high fees and disappointing returns were reasons for the retreat, after pulling $13bn from external managers earlier in the year.

Mass PRIM is well-suited to make the move to direct investing in real estate. It already invests its $6.5bn property portfolio entirely through separate accounts, which entails a higher degree of involvement in acquisition and portfolio management decisions.

“We do all of our investing currently through separate accounts, so we’re effectively a direct investor,” says Timothy Schlitzer, who oversees Mass PRIM’s real estate and timberland investments. “We’ve started to look for direct opportunities. What that really accomplishes is firstly, fee savings, and then secondly, it’s really another tool in the toolbox.”

Mass PRIM’s debut ‘do-it-yourself’ acquisition was land and a ground lease from the City of Santa Clara, the home of Silicon Valley. Three class-A, five-storey office buildings totalling 449,000sqft were built on the site in 2013 and are leased to technology companies. They were built by The Irvine Company, which owns the buildings and is leasing the land from Mass PRIM under a 64-year contract to 2081, after which Mass PRIM will own the buildings.

There are several benefits to the new initiative beyond cost savings, Schlitzer says. Perhaps the most significant benefit is the opportunity to enhance Mass PRIM’s property investment performance. 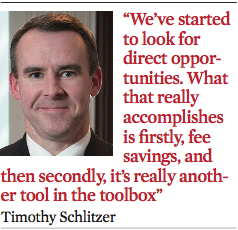 Direct investing “is a way for us to improve our abilities in terms of how we manage the separate account portfolios”, he says. “It keeps us more in the flow of the market.”

Schlitzer says: “As a result of having more deals come to us. We can develop a greater understanding of where those deals are pricing, and then bubble that up to the portfolio management level.” This enables the team to “look at what’s happening on the separate account side and vet what we’re doing there, based on some of the deal flow we’re seeing on the truly direct side”, he says.

Direct investment not only saves on fees, it also improves the investment process of the separate accounts by generating a wider range of market information, Schlitzer says. “That helps us ask better questions. A wider net in terms of deal flow helps us to [understand] what we want. And I think the managers want that – they want a client that can make effective decisions in terms of the investments going into the portfolio.”

The objective is to optimise performance at the margin by looking for transactions Mass PRIM can complete on its own. While the fund has “started to develop relationships directly with the larger brokerage firms”, direct investing will not displace investment fund managers, Schlitzer says.

“We have a great group of investment managers that are managing these portfolios for us,” he adds. “There’s no change that I expect there.”