PREA’s survey shows that domestic investors have been priced out of the major markets in the US, but they are still looking to deploy capital. Greg MacKinnon reports

The Pension Real Estate Association (PREA) has released the results of its annual Investment Intentions Survey. For the second year, this was a joint endeavour with INREV and ANREV, representing Europe and Asia-Pacific, respectively, allowing the survey to present a truly global view of the institutional real estate market.

The survey, conducted in November 2014, is based on the responses of 144 institutional investors, 174 fund managers, and 13 fund-of-fund managers from around the world. A large, global set of respondents such as this allows the survey to provide unique insights on trends within the real estate industry.

Overall, the environment looks bullish for continued deployment of capital into real estate over the next two years. Of investors surveyed, 46% plan to increase their allocation over the next two years, with only 11% foreseeing a decrease. This overall number, however, hides significant variation across the globe. Almost 60% of investors in Asia-Pacific indicated a plan to increase their allocation, versus only 37% of North American investors.

It is important to note that this does not indicate that North American investors are bearish on real estate; only 13% of investors from that region indicated an intention to decrease allocations, so even in North American there is still net new capital waiting to be invested. The differences across regions are more likely due to the relative immaturity of many Asia-Pacific-based investors’ real estate programmes relative to those in North America. While many investors in Asia-Pacific are still ramping up investment in an asset class that is relatively new to them, many North American investors have been investing in property for years and have programmes that are quite mature. 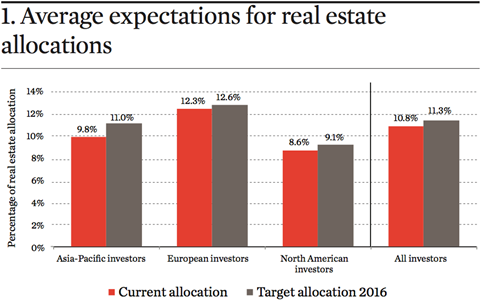 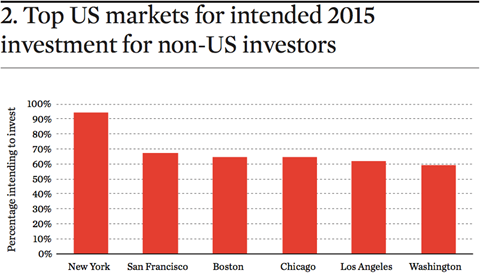 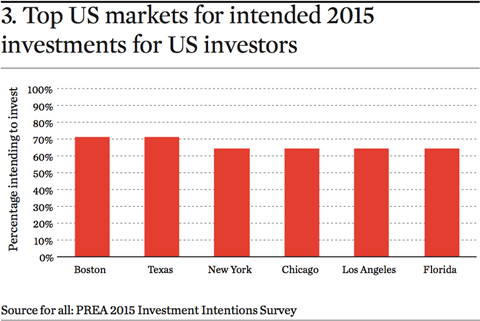 While it is apparent that new capital will continue to move into real estate, with investors in Asia-Pacific an increasingly important source of that capital, the obvious question is: where will that capital go? Of the capital expected to be deployed in 2015, 45% is targeting Europe, 35% the US, and only 17% targeting Asia-Pacific. So, while Asia-Pacific is an important source of capital (although still smaller than Europe and North America in absolute dollar terms), it is not as attractive as a destination. Investors in Europe and North America continue to have a strong home bias to their portfolios. While Asia-Pacific based investors also tend to favour their own region, the home bias is not nearly as strong. Capital from Asia-Pacific has a greater interest in geographical diversification, with 28% of planned capital deployment targeting the US and a further 26% targeting Europe. The more mature and transparent markets of Europe and North America are still a draw for investors from all regions.

Fund managers have a much more bullish view on Asia-Pacific. Over 94% of fund managers indicated a plan to increase investment in that region over the next two years, the highest number across the three regions. Managers, it seems, are far more interested in Asia-Pacific than are their underlying investors.

Looking more specifically at the US, and limiting to those respondents currently invested in or intending to invest in the US, reveals some intriguing findings. While there are many investment vehicles within which real estate investments can be housed, non-listed funds remain the most popular for US investments. This is followed by joint ventures/club deals, separate accounts, and direct investment.

However, it appears that larger investors have a more favourable view of joint ventures/club deal and direct investments than do smaller investors. This is likely due to a combination of larger investors having the size to use these structures, while also valuing the greater control such vehicles offer. It is interesting to note that, when asked about the major obstacles to utilising non-listed funds, the most common issue given by investors was cost. Fund managers, however, thought cost was a less important obstacle for investors. Obviously, there are still misunderstandings on some issues between the two sides of the market.

Given high prices currently being paid for core properties in the US, it is perhaps not surprising that the majority of investors view value-add as having the best risk-adjusted return potential for 2015 in the US. With the US economy picking up, and low cap rates for stabilised core properties, many investors are looking for properties with growth potential; more than three-quarters of investors intend to deploy capital in value-add strategies in the US this year, while only half intend to invest in core and only 25% in opportunistic.

In terms of target markets within the US, there are considerable differences across investors. Non-US investors (figure 2) continue to be attracted to the largest and most liquid markets, with New York being by far the most popular planned destination for foreign capital in 2015, followed by the other five major US markets. It is apparent that non-US investors are not deterred by the low cap rates in those markets, which may have significant implications for returns in those markets going forward.

On the other hand, many domestic US investors may have been priced out of the major markets by the flow of non-US capital. US investors plan to deploy capital on a more widespread basis during 2015 with Texas and Florida both generating significant interest. Further, 57% of US-based investors indicated they planned to invest in ‘other’ markets outside of the ones specifically asked about in the survey, compared with only 22% of non-US investors.

The 2015 survey reveals a real estate market is attracting global capital. The pressure on valuations this could entail means that investors must carefully consider the strategies and target markets they pursue. The survey shows that real estate is now truly a global asset class, with a wide spectrum of vehicles, strategies, markets and risk-return combinations from which to choose, allowing investors to choose a specific approach tailored to best fit their needs. 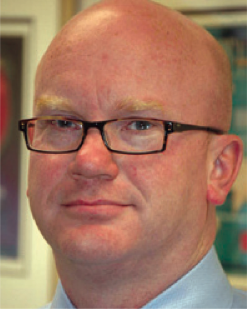