Self Storage: A journey of self discovery

Investment in self storage has picked up momentum in recent years. Investors should expect growing consolidation and a new generation of stores, writes Ollie Saunders

The European self-storage market has experienced an unprecedented level of activity. Three transactions in the first quarter of 2015 signalled good news to a market that is rapidly establishing itself as an important alternative asset class in Europe.

The largest deal was the acquisition of Blue Space in Spain by Fremont, consisting of 17 stores in the cities of Barcelona, Madrid and Valencia. The predominantly freehold portfolio provides over 80,000sqm of self storage – and provides the purchaser with an entry level platform to grow a dominant national operator as the economy improves.

Shurgard Europe has acquired five self-storage facilities from Secur in Germany, and has taken a further three via a management agreement. This takeover increases its German portfolio from 11 to 19 stores and makes it the joint leader in the German self-storage market along with MyPlace – of which Fremont acquired a minority interest in 2013.

The BiG portfolio in the north west of England was acquired by Armadillo – providing 35,000sqm of storage.  The mixed tenure portfolio will be added to the 10 stores that were acquired in February 2014 by a joint venture of investors, which include the UK’s Big Yellow and Australian investors.

These were acquired as platforms for consolidation of the market, following on from the trend in 2013 and 2014 when existing operators acquired a  number of independents as a way to boost their portfolios with more than £35m of transactions between 2013 and 2014.

These deal volumes helped to provide investors with confidence that self storage is now a liquid market, with continued confidence in valuations that had been put on the assets prior to sale. The deals also showed yield compression with arguably a 20% increase in capital values between Q1 2014 and Q1 2015.

Self storage first opened in the UK market in the late 1980s, copying the concept that was successfully developing in the US and Australia. The industry started to establish itself in the 1990s as several portfolios were developed. There are now more than 1,000 stores in the UK providing more than 3m sqm of storage and over 1,500 stores in Europe.

However, this only equates to an overage of 0.05sqm per person in the UK and less than 0.02sqm in Europe. This is low in comparison with US and Australian markets, which have 0.7sqm and 0.16sqm, respectively. The case for growth is compelling (see graph over page). The number of stores per million population, and the square footage per capita are significantly behind more mature markets.

The spread of the financial crisis around Europe was the first real test of the robustness of the industry. With housing volumes halving overnight in some cities, there was an understandable nervousness – but the results were that rents to customers broadly stabilised and occupancy levels dipped only slightly as customers were staying for longer. Occupancy levels started to grow again in 2013 and we are now seeing this filter through into rental growth as well.

So what are the prospects for growth? The key focus for most operators is to either consolidate or develop new modern facilities in major metropolitan areas. London is top of the list with a number of site finders looking for land and development opportunities, followed by more affluent northern European cities such as Paris, Berlin and Stockholm, coupled with activity in Spain and eastern Europe where entrepreneurial owners are dusting off their development plans. 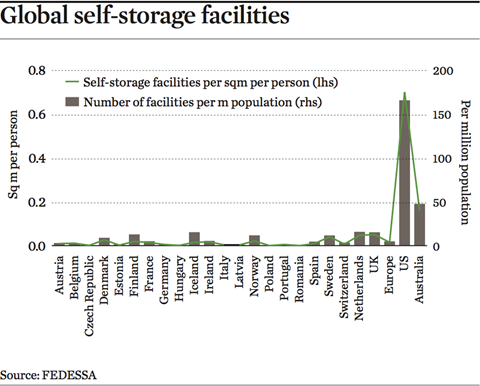 Consolidation is a ‘no-brainer’: the real winners are now those who come top in a Google search and who have the efficiencies of large portfolios – something that the independents have struggled to win at. The challenge is that the industry remains fragmented – by way of example, 60% of the UK’s 1,000 stores are owned by independent operators with less than seven stores.

Development is also a logical route, provided the feasibility works. However, the competition for land in key markets is now such that operators are finding the supply of land too tight – indeed, Safestore sold its store in Whitechapel to a residential developer recently for more than £40m on the basis that the rapid acceleration in land values brought it a bid that convinced it to shut a profitable store in central London.

The industry is innovating around the problem of land price – awareness of self storage has now increased among consumers to such a level that investors and operators are looking for alternative locations, such as underground car parks and basements of new tower blocks.

Once, a successful store had to be big, bright and prominent; now, operators find they have to be convenient to the customers and prominent in Google search results rather than on a main arterial road.

This year looks likely to be remembered as the year of consolidation, and the emergence of a new generation of micro-sized and superstore-sized self storage across European markets.

Ollie Saunders is lead director, alternative assets and head of self-storage at JLL