Should the rise of Airbnb prompt those investing in a buoyant travel industry to check out early? Maha Khan Phillips  and Christopher O’Dea report

In May this year, Berkshire Hathaway, the American multi-national conglomerate owned by Warren Buffett, celebrated its 50th anniversary. Tens of thousands of people gathered in Omaha to attend the event. With hotels rapidly filling up, Warren Buffett suggested his shareholders find another solution. He asked them to consider using Airbnb.

The fact that Buffett was able to make the suggestion shows just how quickly things can change. Airbnb, the online marketplace providing residential rentals in cities across the globe, was launched in 2008. Today, it has 40 million guests who have stayed in 34,000 cities. In June last year, the company was valued at $10bn (€8.85bn). By October 2014, its valuation had gone up to $13bn. This June, that figure went up even further to an eye-watering $25.5bn, an indication of just how quickly its private investors believe it can increase its popularity.

But it is fair to assume that a significant proportion of its 40m guests over the past seven years would have traditionally picked a hotel. So what are the implications of the rise of Airbnb for the hotel industry?

A report by HVS, the hotel and leisure services consultancy, warned that hoteliers may be forced to lower their average rates to increase their occupancy and remain competitive.

But Russell Kett, chairman of HVS, says it is important to put the rise of Airbnb in the right context. “Airbnb is a distribution channel, just like any other,” he says. “It happens to have caught the public imagination, and the public have taken it to their hearts. But that is not any different from any other differentiation that has been happening in the hotel business for years now, such as the establishment of boutique hotels, and chains coming up with hip experiences for guests, as an answer to the boutiques.”

For hotel real estate investors, it is far too early to ascertain the long-term impact of ‘shared economy’ business models like Airbnb.

“As far as we can see, Airbnb has not yet had any significant impact on the real estate business,” says Lisa Neubüser, director, hotel fund management at Invesco Real Estate. “Hotel real estate is long term by its nature. In Europe it is common to look at leases of 10-15 years, and, not uncommonly, 25-30 years in length. Airbnb has only been around since 2008, with the more significant impact on the hotel sector only over the past few years. So the repercussions of disruptors like Airbnb on the hotel real estate sector’s performance needs to be similarly assessed long term as the rise of online travel agents over the past decade.” 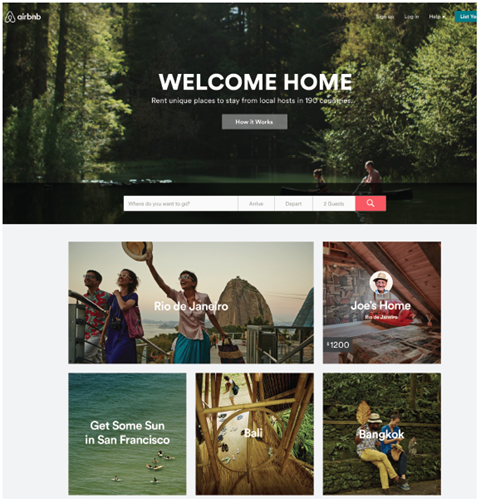 Hotels face a rapidly growing competitor in the form of Airbnb

Online travel agents (OTAs), such as Priceline and Expedia, have become ever more powerful as a result of strategic acquisitions of smaller, regional players. Priceline now controls 62% of the European market and Expedia holds 70% of the US market, according to HVS. The consultancy warns that hotels that have become increasingly reliant on OTAs might soon be forced to work with just two main companies, with limited options for negotiating on commissions.

Airbnb may end up being just another distribution channel, but for the moment it has unfair advantages, as the rentals it offers are mostly unlicensed entities whose vendors do not pay tax and are not subject to any regulatory oversight. Hotel vendors claim that this raises concerns about the safety of guests.

“Airbnb started off as a shared economy,” says Neubüser. “But now you find certain building blocks that are largely for Airbnb commercial use only, even though originally it might not have been meant to function that way. Suppliers are getting more professional, and it is sometimes used as a business to circumvent regulation – a commercial way for people to run hotel-like operations without paying tax for it, without complying with fire regulations, and so on. So it will be a matter of looking at how local regulators respond.”

And regulators are slowly starting to respond. In Europe, Barcelona now requires all accommodation on sharing sites such as Airbnb to be registered, while in Amsterdam, Airbnb

has agreed to collect local taxes from those renting through their site and remit those taxes to the city. It has made a similar deal with Paris, where it has more than 50,000 rentals. It is likely that similar agreements will be reached elsewhere.

But hotels are also recognising that – as with the advent of OTAs – it sometimes makes more sense to embrace innovations. “We’ve seen hotels start to put their own accommodation on Airbnb, as have serviced apartments,” Kett says.

Fund managers remain unfazed about the future. Richard Marshall, fund manager for Standard Life Investments’ Long Lease Property Fund, has been investing in Premier Inn hotels, and says the market for recognisable chains is less vulnerable. “The smaller hotels, rather than the international brands, will be far more impacted by Airbnb,” he says.

Like others, he points out that occupancy rates in London and other major cities remain over 80%. “Markets like London are incredibly undersupplied, and there are times when it is very difficult to get cheap accommodation there. So it’s still a very strong market.”

Geoffrey Shaw, portfolio manager for the BlackRock UK Long Lease Property Fund, says he would analyse the impact of Airbnb-type models the same way he would any other competitor, when making a decision about investing in hotel real estate.

“From an investment perspective, a lot of what we take into account usually applies to Airbnb as well,” he says. “We look at a hotel’s location, its customer mix and what services it can provide. Airbnb will have an impact. But, in the same way, if we are looking to buy a hotel, we’d look at whether the hotel will struggle against its competition or not.”

With demand for hotel rooms near record highs in the US, travellers often find there is no room at the inn. But for hoteliers, the high occupancy has pushed revenue per room to near-record levels, presenting an attractive prospect for institutional capital.

But because most portfolios of top-tier, full-service hotels in the US have been sold in recent years, investors are having to take on more risk – into select-service hotel properties that are more economically sensitive, and new development and construction deals that will bring more rooms on the market several years from now when pricing conditions may have deteriorated.

The hotel industry struggled in the wake of the financial crisis, and as institutional investors raised property allocations, private equity firms acquired lodging assets at bargain prices. Little new supply was built, resulting in a record-setting demand crunch. For US hotels, “Key performance indicators are still at all-time highs,” according to Jan Freitag, senior vice-president of lodging insights at STR Global.

July occupancy of 75.3% for US hotels was the highest single occupancy of any month ever recorded by STR. “Hand in hand with this goes the demand of more than 116.8m room-nights sold, which is 4m room-nights higher than last July and another all-time record for any month,” says Freitag. Developers are breaking ground for new hotels, and a surge in construction that began in February showed no sign of slowing over the summer, as new rooms under construction were 19% higher in July than a year earlier. But Freitag says new construction will not outpace room demand until 2017.

Meanwhile, hotels have raised rates. Revenue per available room, or RevPAR, increased 8.3% in July to $93.61, after 62 months of rises, with no end of growth in sight. Fitch continues to expect overall US RevPAR to grow by 7% during 2015. Hospitality is booming – and investors are taking notice. Global hotel transaction volume in the 12 months leading up to April 2015 was up 57% over the same period the previous year, according to JLL. Deals in the Americas climbed a heady 81% over last year, to $13.3bn, almost double the $7.7bn in EMEA transactions.

But challenges loom. Most value-add opportunities were captured between 2009 and 2011, leaving little scope to reposition properties in today’s strong markets. “A lot of those assets are now being sold,” says Richard Sprecher, vice-president of business development at Aimbridge Hospitalty.

This is fuelling a boom in single-asset deals, which JLL expects will reach around $40bn this year, surpassing the 2007 peak.

“Private equity groups are trying to find the next value-add opportunity,” says Sprecher, but that’s getting harder as “values keep going up”. So investors are adapting. “More PE groups are getting into the select service space,” he says, and all capital sources are funding new development. This could spell trouble down the road.

Some investors have checked out of US hotels and are heading south. The smart money, they would argue, is focused on the emerging middle class in Latin America, in markets that offer rising demand and less competition.

JLL says the next big opportunity for private capital investment in hospitality property is outside of the US. One-third of investment-grade hotel rooms are located in emerging markets, but only 10% of hotel deals occur there, JLL says. And institutional capital is scarce – private equity firms are involved in only 25% of emerging-market hotel deals, compared with 45% in mature markets. “Yield potential is strong and competition is lower,” JLL says.

The smart money is already in motion. Equity International, the private property investment firm of Sam Zell, early in 2014 invested in Cartagena-based Decameron Hotels & Resorts, Zell’s second transaction with Colombian partner Terranum Group. Decameron specialises in all-inclusive vacations, at a time when many Latin Americans are taking resort holidays for the first time, giving Equity International a stake in Latin America’s rising middle class. With more than 9,000 rooms, it is the largest hotel operator in the region.

“The Decameron platform serves and profits from the demand of the emerging middle class in Latin America,” says Tom Heneghan, CEO of Equity International.

Even as its economy weakened, Brazil was a popular destination for private capital. A JLL report in partnership with the Brazil Hotel Operators Forum noted three major deals involving private equity funds last year: Quantum Strategic Partners’ acquisition of Atlantica Hotels International; GTIS Partners’ acquisition of 70% of the shares of Brazil Hospitality Group; and the Heritage Investment Services Fund’s acquisition of Rede Arco Hoteis and development of 20 hotels under the Zii brand.

But investors had best not tarry, says JLL. While private capital is scarce, the supply of hotel property in emerging markets is growing at twice the pace of mature markets, and that will “play to the favour of first movers”.