The Marriott-Starwood merger has created the largest global hotel group – and one with an ‘asset-light’ strategy. Stephanie Schwartz-Driver reports

The merger of Marriott International and Starwood Hotels & Resorts Worldwide will reshape the hotel landscape by creating the largest hotel group in the world, with over one million rooms across the globe. From an operational standpoint, it looks like a favourable development in the industry, but it remains to be seen whether it will have any effect on underlying real estate values.

Both Marriott and Starwood are committed to an ‘asset-light’ strategy: they own very little real estate, instead granting brand licences to owner-operators. Of Marriott’s approximately 4,500 hotels, only about 10 are owned by the company, which has announced plans to sell these remaining holdings. Starwood similarly has been selling properties in preparation for the merger.

As recently as June, Starwood sold two hotels in Florence, Italy, to Nozul Hotels and Resorts, a sale that included long-term management agreements that will keep the hotels in their existing brand families. Starwood still owns about 20 properties around the world, and many observers expect these to be sold sooner rather than later. In fact, in its bid for Starwood, Marriott estimated that divesting owned hotels could generate around $2bn in capital that could be otherwise deployed.

This asset-light strategy is becoming more common, notes Mark Wynne Smith, global CEO of JLL’s Hotels and Hospitality Group. “Many hotel brand companies have divested real estate to focus on operating hotels. A prime current example of this strategy is Hilton Worldwide’s announcement to spin off its owned real estate, which comprises a number of large, iconic properties in gateway market locations, into a publicly traded real estate investment trust.” 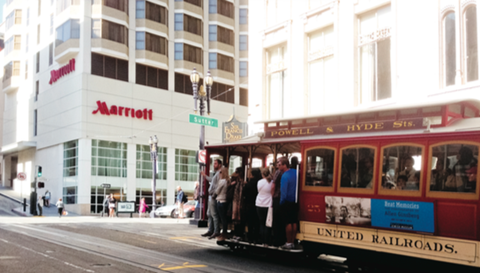 Hilton controls almost 750,000 rooms worldwide; the REIT will include 70 properties amounting to 35,000 rooms. According to Hilton, “the REIT will have a high-quality portfolio of luxury and upper upscale assets, located across high-barrier-to-entry urban and convention markets, top resort destinations, select international regions and strategic airport locations”.

Although many major hotel groups are pursuing asset-light strategies, Wynne Smith stressed that “the real estate side of the business remains integrally connected with the management/operations side of the business, as both sides bring expertise to the table and this will continue to be the case.”

This asset-light strategy is what investors in US public hotel companies prefer, says Mike Cahill, CEO and founder, Hospitality Real Estate Counselors (HREC). “Investors are a little concerned but they view the Marriott-Starwood merger generally as a positive move. The brand and its ability to attract customers will only get stronger,” he says. Yet there is some concern about the longer-term impact of the combined group, in a landscape that has seen a strong uptick in new hotel supply in the US.

This year developers have added to US inventory by 1.7% according to STR, on top of a 1.1% increase in 2015; the group forecasts a 1.9% increase in 2017. As a result of new construction, occupancy rates in the US, at historic highs, will decline a few percentage points. A decline in occupancy rates may lead to slower revenue growth.

Globally, more than 11,000 properties, totalling 1.9m rooms, are being planned or under construction, according to Lodging Econometrics, which is a 9% increase over last year.

In this business environment, investors will be watching the newly merged entity carefully. “Pros to the merger include a combined sales and marketing database which should result in more prospective group booking leads,” says Wynne Smith. “But, at the same time, more hotels affiliated with the same parent company will be vying for the business. Hotels will have a larger list of loyalty programme members to market to, but again there will also be more hotels to spread the business among.

“If the management companies are able to garner operational synergies due to the larger size and, for instance, pay lower commissions to online travel agencies stemming from the greater bargaining power, then hotel profitability levels could see an uptick, which would augment hotel real estate asset values.”

It is true that, from the perspective of operators, there are lots of positives, says Cahill. “From an operations perspective the enhanced ability to generate room nights is highly positive as the honoured guest programme, which allows points to be redeemed around the world, is getting stronger,” he said. Starwood has 21m loyalty members worldwide, who will be added to Marriott’s base of 54m members.

But at the same time, the newly combined entity would have greater bargaining power in its negotiation with property owners and licensees. “The owners are concerned that they will have less leverage,” he says, especially in terms of change of ownership product improvement plans. “Without Marriott and Starwood competing for licensees, Marriott has tremendous leverage, and the more Marriott demands can negatively affect owners’ profitability.”

A report by CWT found that the combined corporate spend market share in top cities makes the Marriott-Starwood business dominant. “In 14 of the 20 top cities, the combined Marriott/Starwood portfolio is anticipated to represent 30% or more of corporate room nights, with Minneapolis market share reaching 50%,” according to the report. But Cahill does not expect this to represent a threat to well-performing properties. “They will only start terminating licences for products that are borderline on quality,” he says.

More room for consolidation
But this enhanced leverage will also help the hotel industry as a whole stand up to competition from online travel agencies as well as industry disrupters like Airbnb.

“The merger, if finalised, would create the largest hotel company by number of rooms. The combined company is expected to benefit from greater economies of scale and potentially have more bargaining power in setting commissions and fees with online travel agencies,” says Wynne Smith. “The merger is expected, on balance, to be favourable for the industry in terms of giving a larger company more clout with regard to its core business model when facing disruption from newly emerging technology outfits.”

Although the merger would give an advantage to Marriott-Starwood among hotels, it is still dwarfed by the 2.3m-room inventory of Airbnb – larger than Marriott, Hilton, and InterContinental Hotels Group (IHG) combined. 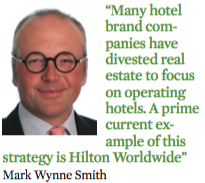 Such competition may inspire even more consolidation in the industry. Last year was the busiest for hotel deals since 2007 (in dollar amounts) and 1997 (in number of deals), according to Dealogic. But there is still room for further consolidation.

Even with the mergers and acquisitions already announced, the lodging industry remains more fragmented than other large consumer industries in terms of the market share controlled by the top brands. “Over the next five years, the market share of the five largest global hotel companies is expected to grow by approximately 50%,” says Wynne Smith. “We expect to see more consolidation among operators and real estate owners alike, whether portfolio transactions or public-to-private trades.

“The case for hotel brand consolidation is that public markets reward growth. Hotel brands are on a quest to bolster their pipeline. With the natural attrition in properties and limits to new supply growth, the surest way to grow is often by acquiring brands to bring those management or franchise contracts. Equity analysts reward those that have a full range of offerings, in terms of service levels and geography.”

Buzz around acquisitions has continued. In August it was rumoured that Anbang, frustrated in its attempt to acquire Starwood, was bidding for IHG, although Anbang issued a statement denying this. In 2014, Anbang purchased New York City’s famed Waldorf Astoria Hotel from Hilton for the record price of $1.95bn; the new owners have announced plans to close the hotel for three years for renovation, which will include converting around two-thirds of the rooms into luxury condominiums, resulting in a much smaller, reconfigured hotel.

IHG has its own experience with mergers. In December 2014 it acquired Kimpton Hotels and Restaurants, a boutique chain known for its stylish properties. That merger has reportedly not been all plain sailing, as Kimpton’s quirky style has rubbed against IHG’s more traditional ways. That said, many observers think that boutique groups are a good target either for merger or for acquisition by larger groups eager to expand their demographic appeal.