In 2005, the city of Lyon launched Vélo’v, a bicycle-sharing system with the primary aim of reducing traffic. The scheme was so successful that, a decade later, the number of cars entering the city has fallen by 20%. Similar initiatives have been set up in many cities across Europe, with planners saying that cars in inner cities will soon be a thing of the past.

While this is good news for the environment, it is less likely to be good news for investors in car park real estate. The rise of the ‘shared economy’ – in this case, car-pooling, using bicycles, and working and living in close proximity – means people are driving less.

But fund managers and operators say that they are adapting to the changing times.

“For many years, car park occupancies and prices continued to grow, waiting lists for season tickets and car park full signs were commonplace within the industry,” says Brian Parker, managing director of operator Britannia Parking. “However, the recent global financial crisis, rising fuel prices and the promotion of public transport and car sharing have caused occupancy levels and demand to drop. The change in user trends has forced the industry to diversify and there are now more ways to engage with customers and maximise opportunities.”

Parker says that new developments, such as automatic number plate recognition technology, web-based payments and account user loyalty schemes, have enabled operators to better understand their users and to monitor their behaviour. This information can be monetised to generate value.

Because of licence plate recognition techno-logy, retail outlets can offer products to consumers. “When you turn up at a supermarket, they know your car comes in and they try to link that information to what you spend at the till, with a loyalty scheme for your car,” says Ollie Saunders, lead director of JLL’s alternatives division. 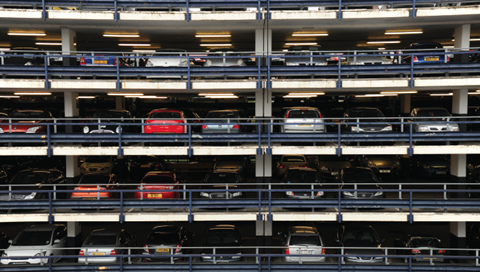 Saunders says car park operators are coming up with innovations, such as putting self-storage units into car parks to maximise the space. Operators are also installing cycle racks, shower facilities and changing rooms. “People pay £5 a day to have a shower. That’s a lot of money. We have changed the use of car parks.” There is also talk in the UK of installing small hotel pods, according to Saunders.

Fund managers say the sector is attractive because it offers strong yields of around 6%, while still generating income, as long as you are leasing out, rather than operating the car parks yourself. It is also appealing from a risk management perspective.

“Car parks generate quite good cash flow, which will cover you in a default situation,” says Richard Marshall, fund manager of Standard Life Investments’s Long Lease Property Fund. “If you have an office building and a tenant defaults, you have to secure a new tenant and spruce up the office. But if my car park operator defaults, then I would just run the car park myself and generate income.”

But car park real estate suffers from a lot of capacity constraints. Bouwfonds Investment Management is a leading player in the sector, investing across Europe and posting average returns of approximately 5%, targeting returns of 6% to 8%. But it still only has €700m in assets under management.

“The biggest challenge for newcomers in this market segment is that the market has high barriers to entry,” says Bart Pierik, managing director at Bouwfonds. You really need to build a network among developers and car park operators, municipalities, and to have local feet on the ground. It’s also about finding the right opportunities. We have a lot of deal flow, but we decline a lot of opportunities because we don’t like the location of the car park or the investment characteristics.”

The firm has been active in the sector since 2005, launching three funds. Pierik says the long leases are one reason why the sector is attractive. “Because the leases are very long, on average, often extending over 20 years. On top of that, they offer protection for inflation and are attractive for investors. The long lease period and inflation correction, topped by strong, mostly inner-city locations, give this type of real estate a low-risk profile. This is strengthened by the fact that vacancy is a limited risk, because even when an operator goes bankrupt, the owner of the car park still has the income from the customers who drive into that car park.” 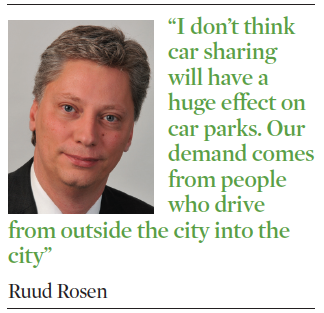 Ruud Rosen, fund manager for Bouwfonds Parking Fund II, believes that changing use of cars will not be a long-term challenge. “I don’t think car sharing will have a huge effect on car parks, because the car-sharing concept is mainly used by people who live in inner cities and either don’t own a car at all or have licences for on-street parking, or use residential car parks. In other words, those people do not use our car parks. Our demand comes from people who drive from outside the city into the city.”

But what about the advent of driverless cars, and Big Data propositions such as the taxi company Uber?

“One of the big debates is around driverless cars and what impact they will have on car parking,” he says. “In the short term, we don’t know. But in my opinion, as an investor I still see car parks playing a role, because people will want to have a secure place to charge their electric vehicles, as opposed to having a car constantly on a loop. Car parks will evolve, but there will always be a requirement for them.”