Growing demand for protein from emerging economies explains why institutions are ploughing into the asset class. Christopher O’Dea reports

Probably the oldest asset class in the world, farmland is becoming one of the most popular real assets investments. One major institutional investment manager recently increased its assets under management in farmland by nearly 40% with the closing of a new agricultural fund.

Why the rush? In addition to a favourable medium-term outlook based on underlying crop cycles, increasing demand for protein from developing countries also supports income returns and price appreciation.

Government policies encouraging clean energy – in particular the US requirement in 2005 that transportation fuels contain ethanol – have added to demand for corn. The link between crops and the biofuel market caused a surge in corn prices. But the longer-term impact has been muted by the drop in oil and natural gas prices, bringing dietary changes to the fore as the principal factor driving demand for both row crops and permanent crops, and the valuation of underlying land.

But science and technology will continue to have a major impact across the agricultural sector, from farming operations and land management to food production and the use of valuable resources – from seed and fertiliser to water. Developments in chemistry and biology are combining with information technology to boost the prospects for farmland – and opportunities to invest in companies that enhance – or depend on – the productivity of farmland.

The new fund will invest in high-quality farmland across North and South America, and Australia. The global remit will deliver diversification and risk mitigation, allowing the fund to balance the risks posed by weather patterns and events, currency valuations, and farming practices around the world, says Justin Ourso, senior director and agriculture portfolio manager at TIAA-CREF Asset Management. 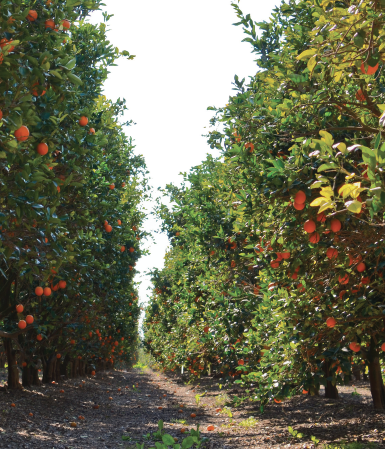 “To some extent, agriculture is a zero-sum game,” he says. “If Australia declines, commodity markets will respond and that can be an opportunity for the fund. We can invest tactically across different regions and hemispheres, and look at regions within a country to identify relative value.”

With an agriculture investment team of more than 100 people, TIAA-CREF has global scale in the sector. Most of the investment professionals are part of Westchester Group Investment Management, in which TIAA-CREF took a majority ownership position in 2010. Founded in 1986, Westchester focuses solely on TIAA-CREF’s global platform, Ourso says, along with certain legacy clients.

The fund will use three or four investment approaches, Ourso says. The first is a straight cash lease of land, which gives the fund the least exposure to the counterparty or crop yields. A shared lease specifies how the landowner and the tenant operator will share production and crop risks. Custom farming arrangements can produce higher returns, since the landowner will typically assume more production and price risk, with the tenant limited to providing farming services. In direct farming, an investor owns or buys land, hiring a team and obtaining all the resources to plant and harvest a crop.

The prevalence of each approach varies by country, Ourso says. Most approaches could be used in the US Midwest, for example, which is the “deepest, most advanced farmland market in the world”, while Australia “does not have as deep a tenant market”.

Whatever the approach, the attraction of farmland for institutional investors is ultimately its low correlation with other assets, and its high degree of inflation protection, says Michael Humphrey, managing principal and co-founder of Courtland Partners.

While recent returns have been strong, farmland is exposed to traditional risks such as weather – and newer risks like energy policy – that can have a significant impact on crop prices. “You always have to have a one-year view on the crop cycle”, when investing in agriculture, says George Lee, portfolio manager of the CF Eclectica Agriculture Fund. 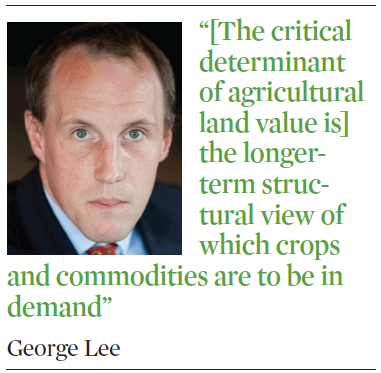 In December 2014 and January 2015, for example, corn futures prices in Chicago sunk to between $3 and $3.50 per bushel, a level so low “people were concerned that marginal land would be taken out of production”, Lee said. That price is close to the marginal cost of production. But Lee’s base case calls for corn prices to stabilise between $3.50 and $4 per bushel. “We’re starting to rebuild inventories from extremely low to just about comfortable levels,” he adds.

Corn prices reflect the link of the crop to global energy markets. The requirement by the US that refiners add ethanol to fuel added 0.5-1% to the structural demand for corn, Lee says. Production was unable to keep pace.

The corn belt was doing well through 2012, says Humphrey, but the fall in global oil and gas prices and reduced fuel consumption cut demand for corn to make ethanol. This led to a sharp drop in prices – performance of corn-related farmland told the story, he adds, dropping from 15.1% and 17.4% total returns with 10.5% and 12.5% appreciation returns in 2011 and 2012 respectively, to a total return of 6.3% with price appreciation of just 2.5% in 2014.

While short-term swings in major crop prices can affect land prices – and the entire agriculture value chain – the critical determinant of agricultural land value is “the longer-term structural view of which crops and commodities are to be in demand,” Lee says.

The main theme in agriculture is protein, he says, as consumers in emerging markets improve their diets by replacing staple grains with proteins. In India, for example, where much of the population is vegetarian, Lee says lentil production is rising because lentils have twice the protein of rice.

Lee does not expect the latest bout of instability in emerging markets to change the trend. In the wake of the emerging market crisis of the late 1990s, he says, “there was a 12-18-month hiatus in underlying demand for protein”, but that crisis was much worse than the current declines. In general, he adds, food demand is quite stable. “Underlying consumption doesn’t change that much.”

The £25m Eclectica fund can own land or land companies, but most agricultural land investment is not done through listed companies. That leads Lee to take positions in seed, fertiliser, farm machinery and food production companies – stocks that are a large part of the economy, but do not make up a big part of any major index. The top three sectors are protein at 28% of assets under management, agribusiness at 21% and seeds and crop production at 19%. The top holding is Hormel Foods, followed by Amsterdam Commodities, which specialises in small-crop nuts and seeds that lack traded markets, and seed giant Monsanto.

One of the major themes in the fund is the convergence of biology and chemistry – seed biologists and agriculture chemists finding ways to enhance certain seed traits and improve plant growth over a crop lifecycle. “This synthesis of chemical and seed technology is likely to drive the next generation of products making its way into the pipelines for the industry,” Lee says.

Scientific progress will help farmers produce more crops, which will ultimately boost the value of agricultural land, and innovation is a key element of TIAA-CREF’s agriculture investment approach.

In 2013, the firm launched the TIAA-CREF Center for Farmland Research at the University of Illinois, promoting agriculture industry research and educational initiatives in sustainable asset management in farmland. The firm also publishes an annual report, Responsible Investment in Farmland, which describes how TIAA-CREF integrates the Farmland Principles of the UN Principles for Responsible Investment into its agriculture activity.

Issues such as soil fertility and water management are “increasingly important,” says Ourso. “We’re getting more questions on environmental and sustainability considerations from investors, asking how we approach and manage those issues.”